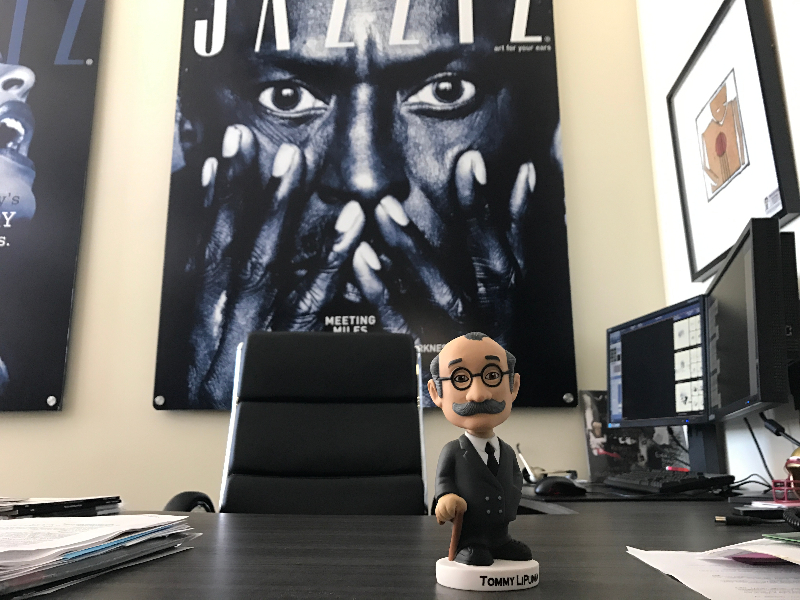 A year before I launched JAZZIZ, I bought an LP — this was before the emergence of CDs — based on its cover alone. The album was Casino Lights—Recorded Live at Montreux, Switzerland, and it was easy to read the cover type: “featuring David Sanborn, Al Jarreau, Randy Crawford, Yellowjackets, Neil Larson, Buzz Feiten, Mike Mainieri and Larry Carlton.” How could this be? How could some of my favorite artists, with no obvious connection, be on one album. I bought the record, took it home, carefully slipped it out of the Warner Bros sleeve, cued up Side One on my Technics belt-driven turntable, reclined on the couch with my feet on the coffee table and read the liner notes. With my sight and sound senses turned all the way up, I found a commonality among these seemingly disparate jazz stars: Tommy LiPuma.

I became obsessed with LiPuma. I learned that beyond his Midas touch with so many artists I enjoyed, from Natalie Cole to Peabo Bryson to Everything But The Girl, he was also the mastermind behind George Benson’s Breezin’ and the producer of Michael Franks, Claus Ogerman, Michael Brecker, the Yellowjackets and many others. Further research revealed that LiPuma produced rocker Dave Mason’s hit first solo album, Barbra Streisand’s The Way We Were, as well as albums by Dan Hicks, Hugh Maskela and Leon Russell. Finally I realized that LiPuma wasn’t simply a jazz guy; he was a musical genius. To say the least, I was a big fan.

During the first decade of JAZZIZ, I’d occasionally run into Tommy at shows and conventions, but I didn’t get to know him well until we met at a showcase for a new artist that had just been signed by GRP. The show was at the now-defunct Five Spot in New York City, the jazz club that had showcased Coltrane and Monk the year I was born and that had once served as a gathering place for some of the world’s leading abstract expressionist painters. I stood with Tommy at the back of the club, and we discussed how the unknown Canadian artist we were watching onstage was going to rock the jazz world. I agreed to feature her on an upcoming cover — and that’s how Diana Krall first landed on a JAZZIZ cover.

When Tommy became the head of GRP Records in the Universal Music Group, he invited me to dinner in Manhattan, where he told great stories and shared his views on the future of jazz and other matters. It was the beginning of wonderful friendship. A few years later, I started a label with Lee Ritenour and Mark Wexler; it was a joint venture with the Verve Group at PolyGram and, as fate would have it, when Universal bought PolyGram, Tommy, figuratively, became my boss. One day he called while I was in Florida. In a choked-up voice, he asked me to come to New York to talk about the label.

When I arrived at his office, he was lying on the couch with his hands over his face, having stayed up all night working on Krall’s latest project. He told me that the newly merged Universal insisted on getting rid of all joint ventures, and he was mandated to buy me out and cut me loose. When he asked me what I wanted, I replied simply, “a lot of money, to keep the i.e. music brand and to be able to pick up any artists that Verve drops.” Without hesitation, he agreed to all of my requests. A few months later, I was leaving a midtown restaurant just as Tommy was arriving. We hugged and he asked me to stop by the next day. Of course I obliged. Soon after I arrived at his office, he asked if I was interested in working together again. When I reminded him that he had just recently ended our business relationship, he responded, “That was a corporate decision. I want to work with you guys.” Talk about feeling honored.

Since that time, Tommy and I have stayed in touch by email and text. Occasionally we’ve had long conversations on the phone, including when he was in the studio with Paul McCartney. Last year, when he and I were both in Washington D.C. for a “Jazz at the White House” event, we ran into each other at a downtown restaurant. I suggested we do a podcast together, which we scheduled for a few weeks later. That was the last time I saw Tommy.

A few weeks ago, I invited him to sit with me at the Michael Brecker Tribute at J@LC. But even though Krall was one of the featured performers, Tommy was in Los Angeles putting the final touches on her new album. Next thing I heard, he was in the hospital with pneumonia. On Monday morning, I woke up to the news that Tommy had died the previous night.

I was in tears taking my youngest kids to school that day (and as I write this). Even my 5- and 8-year-old girls know Tommy because his bobbing statue sits on my desk every day as a reminder that there are indeed wonderful and talented people that come into our lives and make the world a better place.

Read: Tommy: The Musical –feature on the life of Tommy LiPuma. Click Here