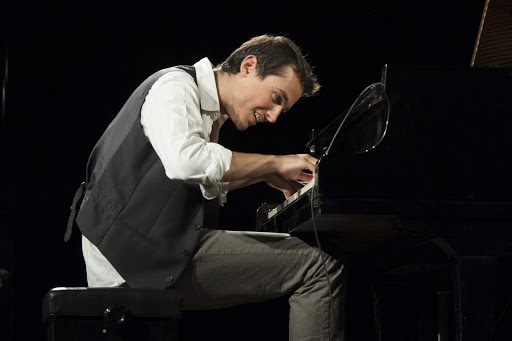 Not yet 30, Mintus splits his time between Tel Aviv and New York City. His unique, freewheeling style borrows from both jazz and classical traditions, interweaving influences ranging from Harlem stride and the Great American songbook to flamenco and Jewish folk melodies.

Guy Mintus states, “Israeli jazz musicians are very much indebted to the founders of the black American art form called Jazz. Personally, when I came to study and live in New York seven years ago, the jazz community embraced and nurtured me. I know many of my compatriots have experienced the same thing and in these troubled times, it feels necessary to express our solidarity from afar. I’m honored to support the Jazz Foundation of America, which has given back to the source of this music for over 30 years, and it feels fitting to feature the music of the American Jewish composer, so heavily associated with New York, and who wrote the first jazz/blues opera for which it is mandatory that it’s performed by black artists.”

Mintus’ prodigious professional career began in his teens; he studied on full scholarships at the Manhattan School of Music and Berklee College of Music. Mintus’ debut trio record A Home in Between was a DownBeat “Editor’s Pick” in 2017; the group’s most recent collection, Connecting the Dots, was issued in 2019.

His accolades have included second prize at the Montreux Jazz Festival’s Parmigiani Solo Piano Competition. He has toured internationally; in the U.S. he has appeared at the Kennedy Center, the Apollo Theater, and Dizzy’s Club/Jazz at Lincoln Center, and at such New York venues as the Blue Note, Joe’s Pub, Smalls Jazz Club, and Birdland. His commissioned works have been performed by the Jerusalem Symphony Orchestra, the American Composers Orchestra, and the Israeli Conservatory, among others. The ASCAP Foundation presented Mintus with their Leonard Bernstein Award.

Mintus has shared stages with such artists as Jon Hendricks, Jimmy Cobb, Trilok Gurtu, and Arturo O’Farrill, who said of the young musician, “Guy is a mad scientist – no one does it like him.”