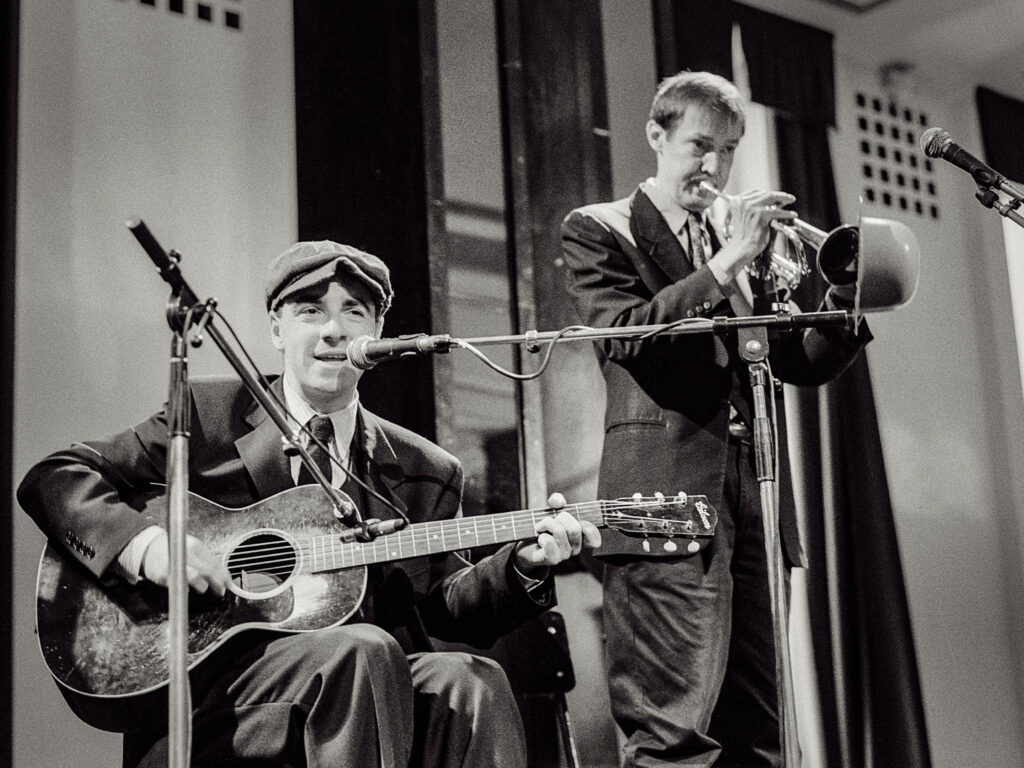 It’s been over six months since the great cornetist Peter Ecklund died at age 74, though it seems that few outside the traditional jazz world know it. His death was not COVID-realted, and it happened amidst the first wave of the virus in New York City, when people here could think of little else. There was no obituary in the Times, no memorial concert, and not much in the way of online tributes. This bears correcting.

I am fortunate to have had Peter as a member of my quartet when I was first starting out as a bandleader, back around the turn of this century. I’d recently moved to New York, and had landed my first legit gig in town – a Monday night, after-hours residency at the now-defunct Tramp’s, on W. 21st Street. The sound of the combo I was fronting was built around wunderkind Russell Farhang’s virtuosic violin playing, but we wanted to add a horn to the mix, to serve as counterpoint (our stringy style, to that point, also included upright bass, Hawaiian steel guitar, and my own acoustic guitar). But the right fit proved elusive; straight-ahead players didn’t seem to know what to do with the New Orleans chestnuts I was calling (“Wabash Blues;” “Love Song of The Nile;” “When I Grow Too Old To Dream”), and the trad players who did know those tunes sniffed at the way we played them – in the wrong keys, at the wrong tempos, and with the wrong chord changes. No one from either camp had much appetite for anything that ventured into rural, rock, or experimental types of music.

Then someone recommended Peter Ecklund – an unassuming, quiet man a generation older than us who just happened to have worked with people like Bob Dylan, Greg Allman, and Bonnie Raitt, and was a regular member of the David Bromberg Band. Peter seemed genuinely pleased to get the call. He showed up to the club early that first night, brimming with one of his most unique characteristics: what might be called calm ebullience. Introducing himself, he gently shook my hand, and said, quietly “I’ll do my best. You don’t have to pay me if you don’t like the way I play.”

Whomever it was who’d suggested Peter knew what they were talking about. The Bromberg band was known for its mix of styles and genres, so he was not the least bit fazed to see songs by the likes of Riley Puckett, Thelonious Monk, and Elvis Costello all included in a single evening’s setlist, nor did he have any compunction about holding forth on the kinds of free, modal treatments we were giving to old murder ballads like “Pretty Polly.” If anything, Peter seemed energized by our lack of orthodoxy. He liked playing things differently from the way they’re typically played, because he understood that sometimes it is these kinds of choices that open up new avenues of creativity – away from cliché, away from the suffocation that can be brought on by an excess of reverence. He loved us, and we loved him. With our in-demand steel guitar player (and former Helmut bassist) Henry Bogdan unable to commit full-time, we invited Peter to become the fourth member of our quartet, and he accepted, with glee.

Peter presented himself on the stand like a character out of a David Lynch movie. He would sit motionless, glassy-eyed, listening intently to every note played, every lyric sung, with hardly any expression at all. When it was his turn to solo, he would rise from his chair in what seemed to be slow motion (an effect of the Parkinson’s disease he finally succumbed to), soloing with lines suffused with warmth, passion, and intelligence. Sometimes the notes he left out, especially on ballads, were the most breathtaking moments of his solos.

Peter had a special knack for knowing just what a song needed. In addition to being an impeccable ensemble player, always working in the service of the song rather than for himself, he had that quality that Randy Newman has attributed to certain songwriters (including Harry Nilsson and Paul McCartney), but is less often found in jazz improvisers: the gift of pure melody. Whenever I listen to recordings Peter played on (my own, and others), I marvel at how his spontaneous solos can sound as though they’d been effortlessly composed.

But maybe what I admired most about Peter was his indefatigable optimism. Behind his seemingly world-weary countenance was acceptance, and even joy. I never had the sense that Peter surrendered to despair. Though we played many memorable shows together for enthusiastic audiences, we had our share of lousy gigs too: the inexperienced sound engineers who did lasting damage to our eardrums; the shady club owners who stiffed us at the end of the night. We were working in the trenches, unsigned and relying on grassroots support and word of mouth. On those mortifying occasions when audience attendance was truly sparse, Peter would remind us of our good fortune. How lucky we were to be professional musicians, he would say, whose primary job was to express ourselves, and how rare that was in today’s world. “Whether there’s two people out there or a thousand,” he’d whisper in the wings, slowly raising his fist with a faint, high giggle, “we must go out there and fall on our swords!” His tone was kidding, but the lesson was not. He’d been here before. He knew how this went.

Peter never dropped names, nor mentioned his more high-profile gigs like his frequent appearances on A Prairie Home Companion, or on the soundtracks of Ken Burns’s documentaries like The Civil War and Baseball. And though his discography over the last half century includes a slew of credits as sideman, arranger, leader, and producer, he was also an immensely gifted (and sadly overlooked) composer. For my money, his 1996 album Strings Attached, is one of his most beautifully realized visions.

Most of all, Peter was a working, gigging, New York musician, part of a long tradition of unheralded session players in this city equally at home in the ensembles of big-name headliners as he was jammed into the corner of a restaurant with a little pickup combo, or subbing in for an unavailable band member at an intimate back room in Brooklyn. His solos are not obsessed over by young virtuosi. I know of no box sets planned dedicated to his body of work. He will likely not be honored with a program at Jazz at Lincoln Center. Peter was a musical zelig, appearing in a potpourri of performance settings, but rarely at the center of any of them.

Those of us who have lived and worked in the New York music world over the last few decades knew Peter as a mainstay of our town’s particular scene. He was part of the makeup of New York – what it has been for a long time, and what we all hope it will be again when the pandemic is over: a place where, on any given night of the week, you can go out and hear some of the greatest live music in the world, played with integrity, skill, and elan by players you may have never heard of.

A year ago, before the world changed, Russell Farhang and I strolled by the site of the old Tramp’s, and fell to reminiscing about our erstwhile bandmate. Neither of us had seen Peter in some time, and we agreed it was high time to fix that. “We need to tell him how much he meant to us,” Russell said, recalling those formative years when just his presence on the bandstand with us filled us with wonder and confidence. But the mission didn’t seem urgent. Peter was ubiquitous, and we knew that we could find him performing somewhere on almost any given night of the week. Until, suddenly, we couldn’t.

Peter Ecklund’s passing is a reminder, especially in this particular moment, to not fritter away the chance to acknowledge those who have offered us a helping hand along the way. To give thanks to someone – a teacher, a mentor, a colleague – who once shared their strength, wisdom, and hope when those things seemed in short supply.

To me, Peter Ecklund will always represent a time when everything seemed possible – a notion he encouraged. I feel lucky to have known and made music with him. The world is dimmer without his kindness, his grace, and his light.

Song of the Day: The Gene Norman Group, “Blowin’ in the Wind”