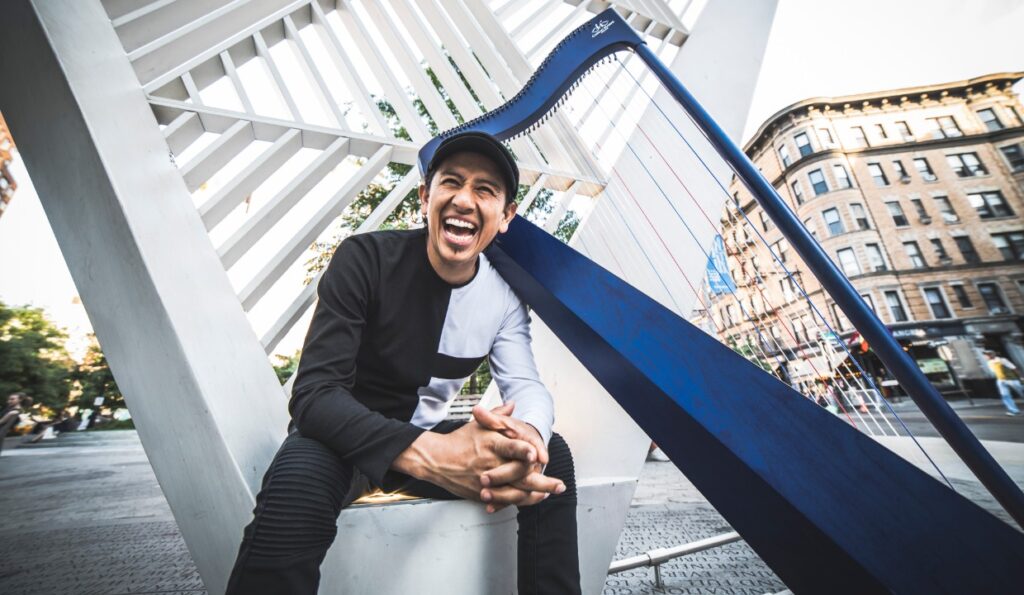 If you’re looking for some great new music to discover this weekend, look no further than our weekly New Release Cheat Sheet. This week, we bring you new music by James Francies, Sons of Kemet, Edmar Castañeda and more.

Virtuoso jazz harpist Edmar Castañeda sets out to capture the spirit of the world as a unified “family” on his new trio record, Family, due out on May 21. The album also features saxophonist Shlomi Cohen, drummer Rodrigo Villalon and special guest vocalist Andrea Tierra. Its title track is full of joy and promise and condenses the album into a single track “At the start of the recording sessions, I saw the potential of the world coming together as one big family,” Castañeda explains. “I know this is possible and this arrangement goes through a myriad of feelings on our journey as one.” Pre-order Family here.

Pianist/producer/composer James Francies has released “Rose Water,” an evocative new vocal track featuring singer Elliott Skinner. “He’s such an incredible singer,” says Francis about Skinner via an official statement, “and I was really hearing a male voice for the song.” The song is included on his forthcoming and expansive new Blue Note album Purest Form. The LP is due out May 21 via Blue Note and we included it in our list of ten albums out this month that you need to know about.

On her forthcoming album, Back to the Garden, vocalist Judy Wexler rediscovers and reinterprets ten iconic songs of love, hope and change from the ’60s, finding them just as relevant today as they were over 50 years ago. The program includes this version of Joni Mitchell’s classic “Big Yellow Taxi,” the Canadian singer/songwriter’s first single, known for its environmental concern. Wexler’s version was arranged by keyboardist Jeff Colella and features Erin Bentlage on background vocals, Danny Janklow on alto sax, Gabe Davis on bass and Steve Hass on drums. Back to the Garden is due out on June 4 via Jewel City Jazz and you can pre-order it here.

Brooklyn-based modern groove Planetary People invited 14 additional musicians to play on “INTERSTELLAR,” celebrating the one-year anniversary of their affectionately named Planetary Transmissions weekly series of original music and accompanying videos launched by the band in response to the coronavirus pandemic. “We needed to keep creating,” says saxophonist Jim Piela via a press release. “Collaboration was always an important part of what we did and the challenge was if we could do that while social distancing.” Watch more Planetary Transmission videos here.

Reedist Ted Nash and actress Glenn Close have collaborated on a multidisciplinary record titled Transformation: Personal Stories of Change, Acceptance and Evolution. This is a marriage of music and spoken word with literary sources curated by Close and featuring the Jazz at Lincoln Center Orchestra with Wynton Marsalis, as well as special guests Wayne Shorter, Amy Irving, Matthew Stevenson and Eli Nash. Order Transformation here.

Saxophonist/composer Shabaka Hutchings and his acclaimed British jazz group Sons of Kemet present a new set of pulsing grooves and global influences on their third studio album, Black to the Future. Hutchings defines the record via a statement as “a sonic poem for the invocation of power, remembrance and healing. It depicts a movement to redefine and reaffirm what it means to strive for black power.” Pre-order Black to the Future here.

Acute Inflections is a New York-based sultry duo formed by singer/songwriter Elasea Douglas and bassist/composer Sadiki Pierre. On May 11, they released their fourth album, 400, marking the 40th-anniversary of Bob Marley’s passing and celebrating his legacy via seventeen stylish, jazzy renditions of well-known classics and lesser-known Marley gems. Songs performed in the album include “Stir It Up,” “One Love,” “I Shot the Sheriff” and more. Order 400 here.