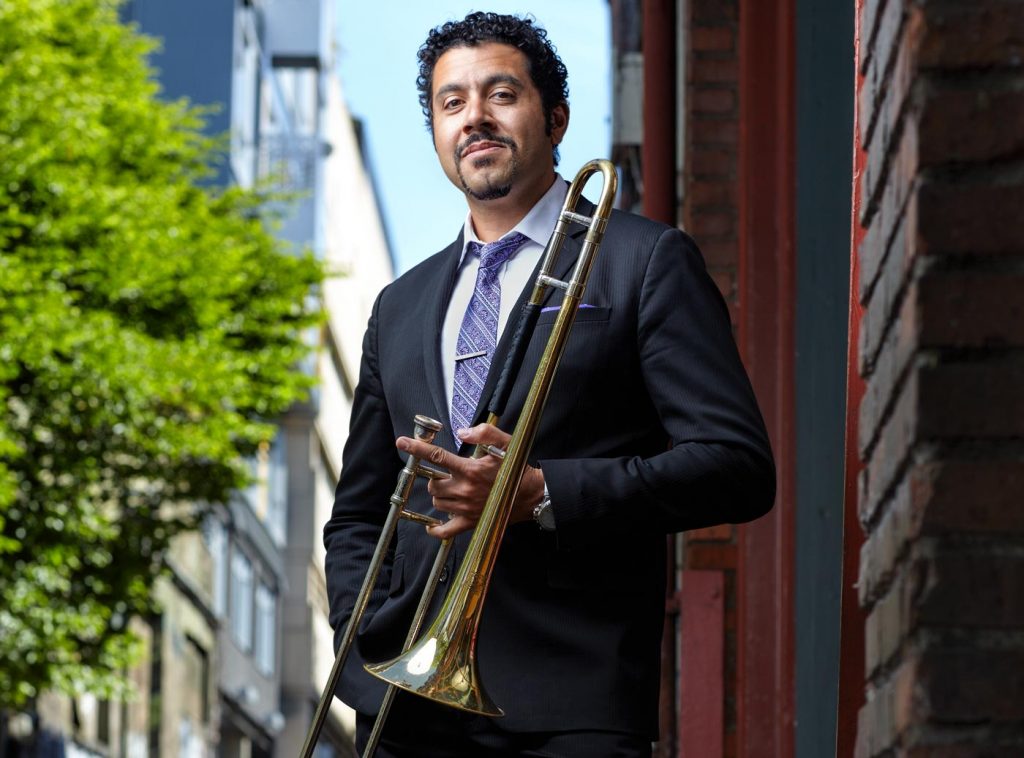 Any recording featuring a bevy of trombone heavyweights playing salsa and other Afro-Caribbean and Brazilian styles is virtually guaranteed to be bold and brassy. But on Titanes del Trombón (Artistshare), ’bone man Doug Beavers adds another critical element: beauty. “I’m all about the full-arranged sound,” he says about the approach he took when recording the 14-track disc, which sashays effortlessly between rhythmically fiery 1970s-style salsa, Rio de Janeiro-bred samba and Latinized modern-jazz standards by J.J. Johnson and Freddie Hubbard. “I come from Don Sebesky, Nelson Riddle, Billy May, Gil Evans and other great arrangers. That style is my heart.”

Growing up in the Bay Area, Beavers says that the trombone found him when his fifth-grade music teacher passed the instrument around the class, and it ended up in his hands last. “I actually started playing it pretty well the first day,” he recalls. A decade later, Beavers was studying at the Manhattan School of Music with Conrad Herwig, who, along with the likes of Luis Bonilla and Reynaldo Jorge, is one of several renowned trombonists featured on Titanes del Trombón. His big break came when he started playing with Eddie Palmieri’s salsa band. “Learning from the maestro was an amazing experience, and that kind of apprenticeship really doesn’t exist today,” Beavers says. “It was truly a school of hard knocks, working with all of those experienced salsa players.”

Beavers learned his lessons well. He begins Titanes del Trombón by playing a robust cadenza that was first performed by trombonist Generoso Jiménez in Havana in the 1940s while a member of singer Beny Moré’s orchestra. Other session highlights include “Esa Mujer,” a romantic salsa ballad composed and sung by Carlos Cascante; “Tu No Sabes,” a tribute to Palmieri’s trombone-grounded style of the late ’60s that spotlights the silky side of Beavers’ sound; and “Borandá,” Edu Lobo’s mid-’60s hit, known for its folkloric shadings.

“This recording is an homage to the great trombone players, but they were also significant composers and arrangers,” Beavers notes. To drive that home, he used instrumentation that includes French horns, tuba, strings, bass trombone, harp and even a glockenspiel.

“The trombone resonates with people because it emulates the human voice so well in its range,” Beavers enthuses. “I feel that this music is more eminently listenable at the first or second hearing than most jazz. And the trombone can really rhythmically drive the band. When we kick in, there’s no instrument that’s as good.” —Mark Holston