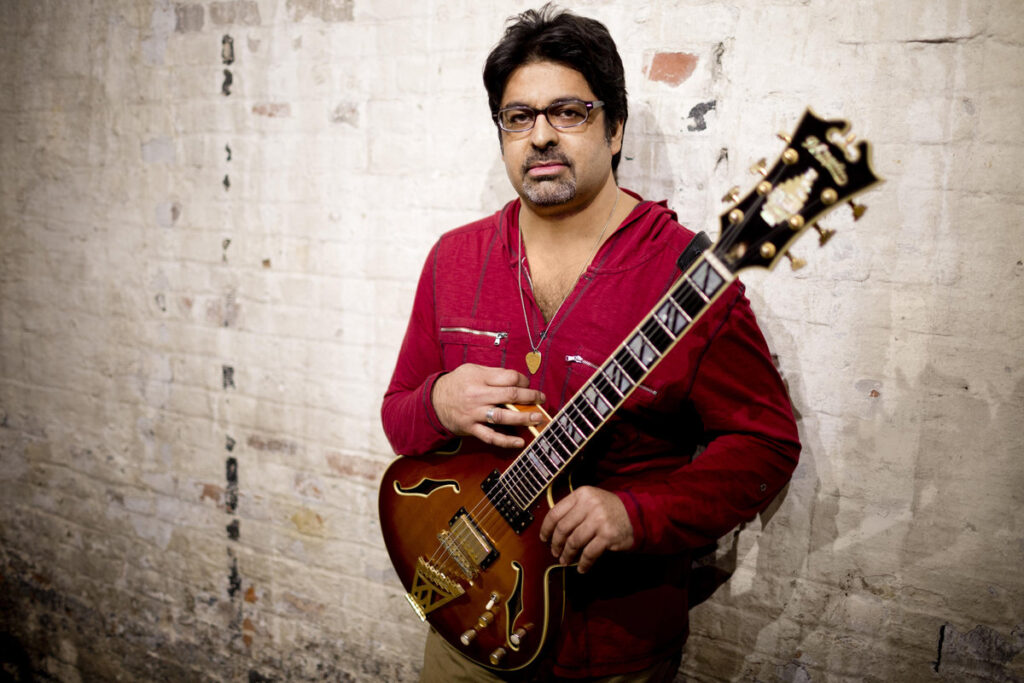 Django Reinhardt is revered as a virtuosic guitarist and a pioneer of so-called “Gypsy jazz,” but as a composer he often remains walled off within that narrow genre label. On his latest album, Django-Shift (Whirlwind), guitarist Rez Abbasi does his part to remedy that oversight, reimagining Reinhardt’s compositions through his own voice, without the reverent imitation practiced by so many bands with “Hot Club” in their names. Delving into the less-explored corners of Reinhardt’s catalogue, Abbasi takes an inventive look at Django the composer, with Neil Alexander on organ and electronics and Michael Sarin on drums. —Shaun Brady

This is a different kind of project for you. How did it come about?

Peter Williams, the curator at Freight and Salvage in Berkeley, California, was planning a Django festival and he thought of me to put together a project. First, of course, my limited brain said, “I don’t really play that kind of style” — Gypsy jazz, or as I prefer to call it, Romani jazz. Then it dawned on me that if Peter was asking me, he knew I wouldn’t go in with that mentality.

Was Django ever an influence on you?

There are a host of guitarists that I’ve spent time with. Django’s definitely one of them, Wes Montgomery’s another. Jim Hall was probably the biggest. Then others, like Barney Kessel, George Benson, what have you. Django didn’t necessarily take any more real estate than those others, but I definitely recognized that he had a very unique sound and was definitely an innovator.

This seems to tie into your interest in reinterpreting your influences, which you’ve done in equally surprising ways with ’70s fusion and South Asian traditions.

The paradigm whenever I do other people’s music is this idea of making music so it sounds and feels like it was my own. That’s what I strive for. In the case of Django, my idea was to explore his whole catalogue first as a listener and not as a composer, an arranger or a musician. That gave me the spark that I was looking for: What really hits me as a listener? A lot of his music is really joyful and bouncy, even when he played ballads. As much as I love that about music, I also like the darker side, so one of my criteria was whether I could add a touch of darkness to some of these tunes.

His music seems to be so isolated from the jazz mainstream, nestled away under the “Gypsy jazz” label. Was it a challenge to approach his work from a new perspective?

Definitely. But the real slap-in-the-face surprise that I got when I started listening to his music was discovering how many great tunes he composed that were fresh to my ears. I’d always thought of him more as an amazing guitar player with a few hip tunes. Because of that freshness, I could then take a fresh approach to adding my own voice.