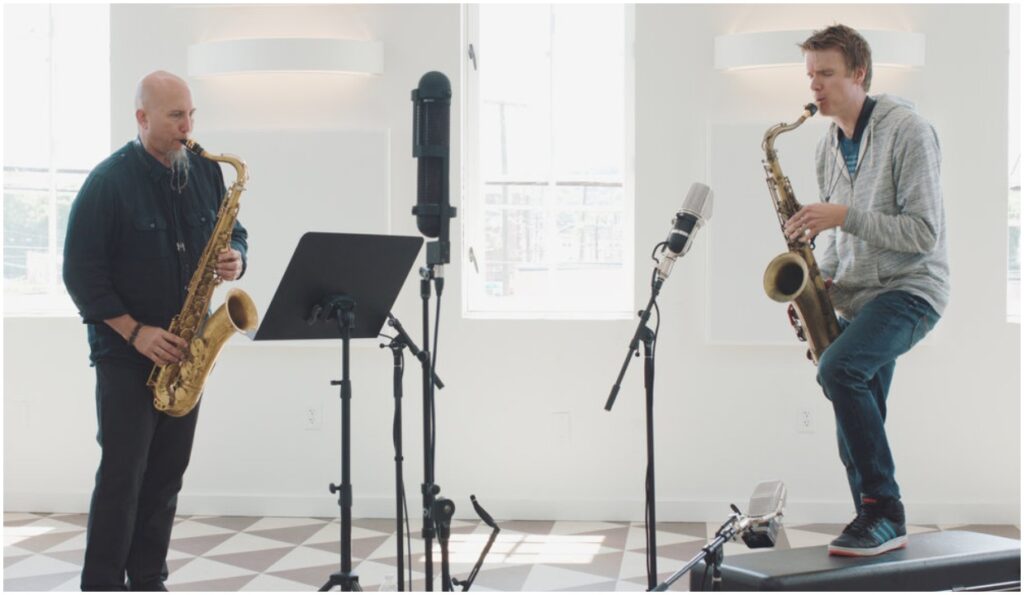 Remember record stores? Remember the thrill of turning your friends on to new music by swapping vinyl and CDs? Yeah, we do too. That’s why we’re rebooting that tradition for the digital age with our “Crate Digging” podcast series. We’ll search through crates of our memories to bring you a handful of album recommendations on a given theme. It’s social media in the truest sense of the term: no algorithms, no computer-generated playlists. Just jazz fans sharing records with other jazz fans.

You can listen to the podcast version via the player below. Write-ups of individual albums and sample tracks follow. Welcome to the party! This week saxophonists John Coffey and Derek Brown talk about some of their favorite dynamic duo albums, in honor of the release of their duo collaboration Symbiosis, out this February 26 via Ear Up. Preorder it here.

DEREK BROWN: “I just hear so much joy in the music and there are a few albums that make me smile as much. And it comes from both players … It’s so fun seeing two amazing musicians doing such a wide range of music and you can tell everyone in that auditorium is just smiling and having such a good time. It’s one of the things that reminds me why I play music.”

JEFF COFFIN: “It’s a trio, so I fudged a little bit on that … Egberto Gismonti, in my thoughts, is such an unsung hero of music, who plays guitar and piano at the most virtuosic level. And Charlie Haden has long been my favorite player. And Jan Garbarek for me, his sound and concept have been a huge, huge influence in my music. He’s such a vocal player. And this is one of those records for me that I adore.”

JC: “I’ve discovered a lot of records through their covers because I do a lot of photography. And this was in the jazz section at a used records store … I was entranced from the moment I put it on. It’s been a very influential record for me.”

DB: “I was just introduced to this yesterday for the first time and I was blown away. I was not expecting that … There are so many emotions in that album. My favorite albums are albums that move me emotionally, not ones that impress me or whatnot.”

JC: “To paraphrase the great J.D. Salinger, an artist’s only obligation in any lifetime is to be true to themselves. I think that Coltrane was uncompromising in his musical and spiritual pursuits … [He] had a very short career, he was dead before he was 41. So, I would say that even if it’s not your thing, listen to [Interstellar Space] in respect to the artist.”

BD: “This album is a reminder to me that dissonance is ok, it’s real. It can even be cherished. Yes, I’m a fan of dissonance that resolves to consonance. But that’s not life all the time, so I think this is just very revealing as an artistic work of what different people experience in life.”

JC: “These are two of my favorite musicians of all time and they hadn’t recorded in 30 years together. And this is a record that they did, I believe, in Keith’s basement. The first time I heard it, I was openly weeping. It’s just two great friends making incredibly beautiful music together. And what struck me … is that at every turn they save each other. They’re so supportive but they’re also catalysts. It’s kind of just like a big hug all the way through the thing. On every tune. And it’s profound.”

JC: Milford was a master percussionist. He taught at Bennington College for 39 years. He was in the ESP label in the ’60s and then went underground. He was studying acupuncture, he was a botanist, a forager. He studied anatomy … He was a renaissance man. The way that he understands rhythm is a different concept. It’s not like you’re listening to Tony Williams. He could play all that but he went in a completely different direction. Very free, very organic. He would vocalize while he played a lot also.

JC: “This was a record that was dedicated to Billie Holiday. Mal Waldron played with Billie Holiday for many years as her piano player. This is all standards and I hadn’t really heard Archie Shepp play standard tunes before like this. And again, it’s one of these records where I was just in tears listening to this thing. The profound understanding that he has of this music … I think that Derek and I both agree that the way that musicians emote on their instruments is really what brings us to them. What connects us.”

DB: “When you think of the word lyricism, a lyrical player, Bill Evans often comes to the top for piano playing. Just the sensitivity and emotion that he can get out of that piano. And so, this is here doing that where you’re hearing the words by such an iconic singer, Tony Bennett. Combining the literal words with maybe the most lyrical player is just a match made in heaven for me.”