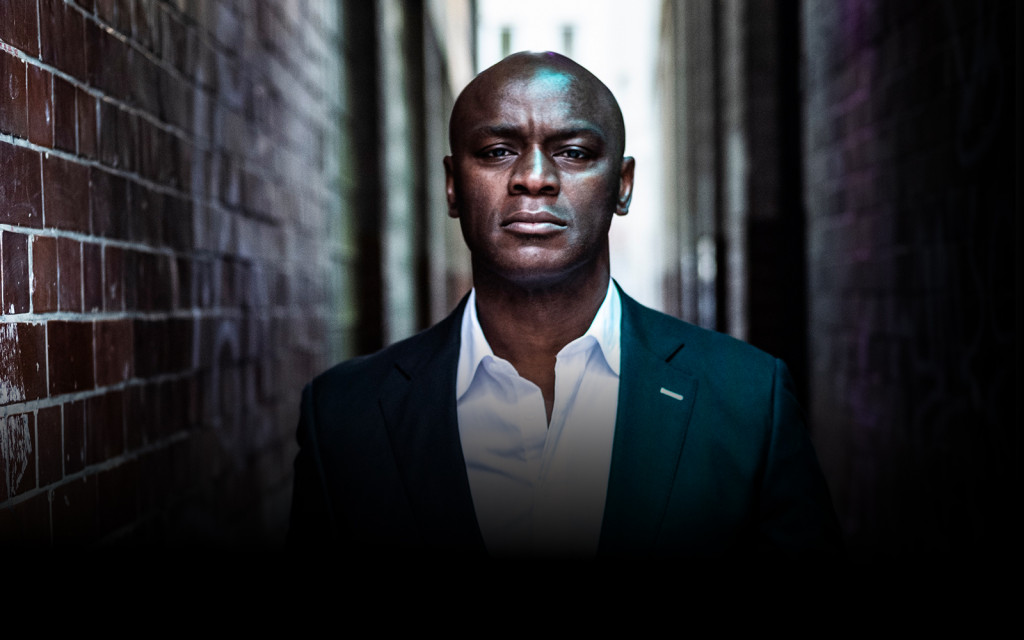 Vocalist Ola Onabulé has always had an ear for the more socially conscious frequencies in jazz music. His 2015 album It’s The Peace That Deafens sought to align the two cultural aspects of his persona — he was born in Britain and raised partially in his parents’ homeland of Nigeria — through songs that drew from the musical heritages of both countries, as well as their complicated and entangled pasts.

His latest outing, Point Less, is an even more meticulous exploration of social themes, with music that takes unflinching aim at some of the most pressing issues of our present moment — global injustice, xenophobia, nationalism, civil unrest and violence — through music that nonetheless uplifts and exalts the good in all people. The album is set for release August 30 on Rugged Ram Records.

Onabulé maintains a rigorous touring schedule — he will have made four trans-Atlantic flights before the year is over — but he says it’s exactly this constant sense of motion that keeps him balanced in such troubling times. “Travel has been the essential redemptive quality in my life, and it continues to renew my hope in humanity,” he told JAZZIZ.

We recently spoke to Onabulé via phone to share his thoughts on trave land how it functions to make the world feel smaller, connecting people of dissimilar backgrounds and putting perceived differences to rest. He also shared his fondest travel memories, as well as his favorite spots for food and architecture. Below is an excerpt of the conversation that has been edited for length and clarity.

You’ve traveled to nearly every corner of the globe. Is there a particular place or time in history that most interests you?

Yes, absolutely. In fact, the moment you first asked the question I began to get a very strong sense of that place. It’s Turkey, and particularly Istanbul. It’s such an ancient city. It’s been under the leadership and imperial rule of so many different civilizations: the Christians had it, the Muslims had it. Pre-Christian, Pre-Muslim times. And all of those influences are there in that city. It’s just so majestic and so ancient. It looks almost like something out of an Indiana Jones movie (laughs).

Beijing was amazing, too, just because it’s as far as I’ve gone from everything I know here in London and in West Africa.

Is there a country or city you’ve gone to that has impressed you with its jazz scene? And you can certainly include England among your options, because the scene there is absolutely astounding.

The weird thing is, I don’t really get to experience jazz in my hometown, because I’m always somewhere else. So I get all of my jazz, including British acts, in “foreign” places. But almost anywhere in Germany is usually so impressive. The audiences are so knowledgable and so sophisticated about the jazz they love. And the festivals curate some of the most incredible sets. You’ll get Kamasi Washington next to a Dee Dee Bridgewater next to a Jacob Collier. I saw a lot of Roy Hargrove in Germany. In fact, almost all of the Roy Hargrove I saw was in Germany. And in turn, we get a phenomenal response from audiences there. They seem to meet us halfway, and we don’t have to work so hard to get into a nice conversation with them.

But really, there’s something about jazz that means that people are already there before you show up. Do you know what I mean? You don’t have to work too hard to win them over. They’ve made the choice to be there, and they’re already a receptive audience.

What are some of the most memorable venues you’ve played?

One really curious place we ended up playing was on the island of Cyprus. It was about eight years ago. Now, politically, there’s always been strife between the two sides that make up the community there. We were going there under the auspices of the United Nations. So we played at the border, and the idea was that, at least for the duration of our gig, we were bringing those two communities together. And those communities are separated by this wide space, with a Turkish Cypriot community on one side and a Greek Cypriot community on the other. And they would gather at the border to watch the gig and enjoy the music. And it was really just a powerful statement about the power of music to unify.

Sometimes you don’t necessarily ascribe purpose to what you’re doing, and this moment reaffirmed that, OK, jazz has a purpose, and this is one such moment when you can appreciate that.

As a traveler, where did you have your best experience with food?

Beijing was impressive, not necessarily for the culinary delights as much as for the culinary curiosities. We tried a bit of scorpion, and I’m still not entirely sure if I enjoyed it or was just confused by it (laughs). Again, the culture of Beijing is just so far from the reality that I live here in the West. It’s just a different mindset. So that was fascinating.

But Italy is my real weakness. When I’m there, I eat way too much pasta. I eat everything on the menu, and then I come back home and try to lose a little bit of weight.

Which city’s architecture do you find particularly inspiring?

Well, the aforementioned Istanbul, for sure. And a lot of places in Italy: Sienna, Florence. And then Spain, certainly. Cadiz is just incredible. And Potsdam in Germany is incredible, too. It’s like a storybook, something out of Hans Christian Andersen. It’s so beautiful and magical looking.

What non-musical item do you have to have with you on your trips?

It would probably be my sketchbook. I actually went to art school for a moment under the misguided notion that I would be doing that for the rest of my life, and it’s just a habit I’ve kept up over the years. I’m always drawing faces and places that I see. It’s something I do on tour in between concerts. I’ll bring it along and doodle something or shade something or fill in some detail whenever I get the chance.

Is there anywhere we can see these sketches?

Oh, God, no! (laughs) I’ve never really thought about showing them anywhere (laughs). My children are all bona fide artists. I’ve got a painter and graphic designer and fashion designer. And I’m not just saying this because I’m their dad and exceptionally proud, but they’re all exceptional artists, and they give me a real sense of what it looks like when something’s really good.

Can you sleep on planes?

Oh yes, I’m very comfortable on planes. I’ll sleep, I’ll watch a movie, I’ll sleep again. I’ll walk again. I actually love taking planes. Now, I’ve traveled with a lot of people who are always alert on planes, no matter how long the flight is, but I’ve never even questioned it! I can just ease right into it.

You mentioned you had kids. Do you have a go-to souvenir that you like to bring back for your family?

I used to love to bring them back technology. And there was a time where I could impress them with that. But they’re young adults now, and their tech is so much better than mine. So now I just kind of seek out little unusual thing, anything that sparks my interest, maybe a little figurine we may have laughed about or a T-shirt with a funny emblem on it. 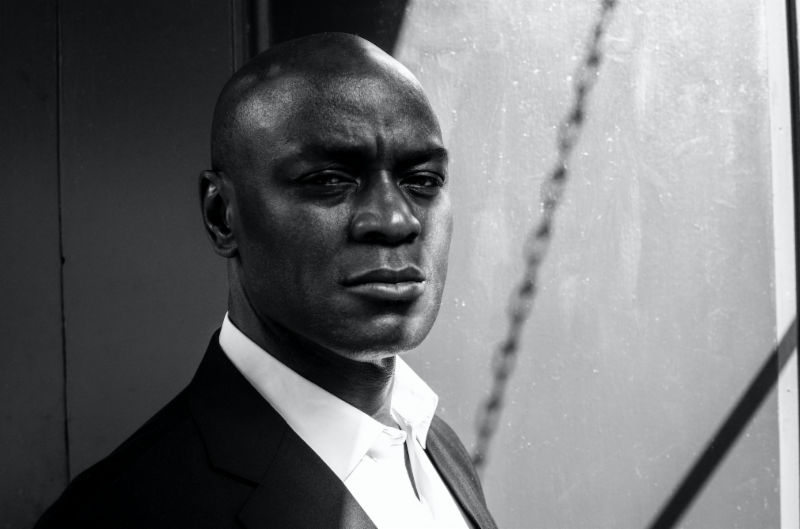 Do you remember your first travel experience?

I do, and it was quite an epic journey. It was the journey back to Nigeria with my parents. My parents came to the U.K. in the late ’50s and early ’60s to study, and when they finished their study, they went back home to nation-build. Nigeria was a freshly independent country at the time. And because my dad wanted to introduce me to Africa and give me a sense of it, which always a thing people did back then, we got on a cargo ship and went to every port along the coast of West Africa, all the way around until we got to Nigeria. So at the age of 7, almost 8, I saw Gambia, Senegal, Ghana, Guinea, Togo, Benin, Sierra Leone. And it very powerfully affected me, on a deeply profound level.

How did this trip — and travel more broadly — broaden your understanding of the world?

Travel has been the essential redemptive quality in my life, and it continues to renew my hope in humanity. You turn up to a country where you don’t speak the language or look like anyone else, or talk or eat like them, but you can see that people are desperately searching for common ground. And once you find it, it’s the doorway through which you realize we’re all the same. As airy and sentimental as that sounds, it’s the thing that I’ve been able to prove time and time again. No matter how far away from home I go, I can very quickly feel at home when I’m around kind, gentle, generous people.

That’s what I’ve learned from travel, and I would recommend it to anyone who thought they had anything to fear from people who looked different from them.

Ola Onabulé will be performing at Joe’s Pub at the Public Theater in New York City on Aug. 29 as part of a U.S. tour that also includes stops at City Winery in Washington, D.C., on Aug. 30 and that venue’s sister location in Nashville, Tenessee, on September 1. He’ll return to Europe to perform at Club Fola in Aix Luynes, France, on Oct. 31 and Jazz Fola on Nov. 1.  Future dates include stops in Cape May, New Jersey; Bremen, Germany; and London, England. For a complete touring schedule, visit Onabulé’s website.

On the Road with Chick: A Jazz Globetrotter Shares His Favorite Spots and Travel Tips