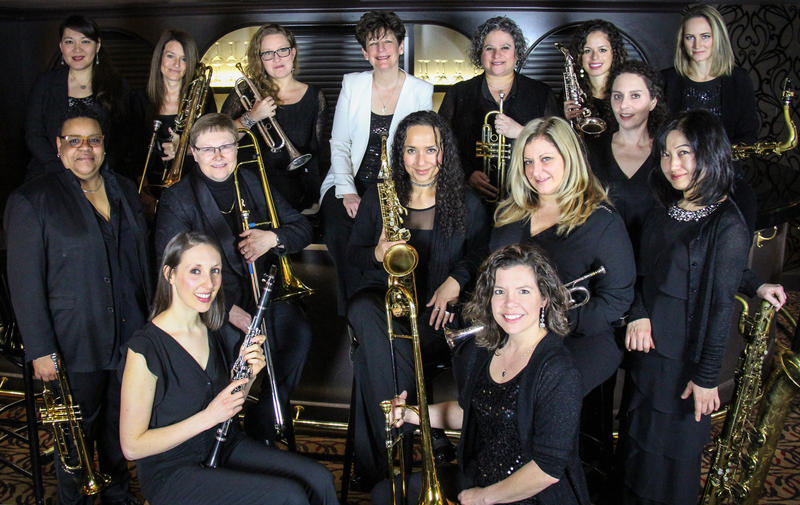 Today is International Women’s Day, a day for celebrating women’s achievement, raising awareness against bias and taking action for equality. At JAZZIZ, we’re marking the occasion by taking a look back at some of the most influential all-female ensembles in jazz history (and a few that are still breaking ground today).

Ina Ray Hutton and the Melodears

One of the first all-female big bands to appear on film, the Melodears were led by singer and tap-dancer Ina Ray Hutton, a popular variety-show artist of the ’20s, ’30s and ’40s. The group’s success was part of a surge in popularity of female-led big bands during the Swing Era, which brought renewed — and much deserved — critical interest to performers like Lil Hardin Armstrong, Blanche Callaway, Valaida Snow, Viola Smith, Lovie Austin, and many others. Here’s the group performing “Doin’ The Suzie Q” in 1936.

The International Sweethearts of Rhythm

The International Sweethearts of Rhythm was the first integrated all-female ensemble in the United States, and one of the most popular bands of the 1940s. The group began in 1937 in Piney Woods, Mississippi, but later grew to comprise musicians from all over the country. As its popularity soared during the ensuing decade, the band was a regular presence at venues like the Apollo in Harlem, the Regal Theater in Chicago and the Howard Theater in Washington, D.C. (It was at the latter that the group set a box office record for attendance in 1941.) In 1945, due to high demand from troops overseas, the Sweethearts embarked on its first European tour. In doing so, several of the band’s musicians became the first black female artists to travel with the USO. Here’s the band performing “Jump Children” in 1945, fronted by the inimitable bandleader Anna Mae Winburn.

One of the most influential female instrumentalists of all time, Melba Liston was a trombone player who grew to prominence in the bands of Count Basie, Dizzy Gillespie, Randy Weston and others, acclaimed not only for her incredible technical prowess but for her inventive mind as an arranger. In 1958, she convened an all-women quintet for a tour of Bermuda. Originally planned as a one-off, the group was met with considerable acclaim, resulting in a U.S. tour upon their return. Unfortunately, this group never recorded. But that same year, Liston did manage to wax her one and only album as a leader, Melba Liston and Her ‘Bones, featuring Liston and a quartet of fellow trombonists. Though it’s not technically an all-female ensemble, we include the cut “Blues Melba” here to honor Liston’s important legacy.

Headed by drummer Sherrie Maricle, The DIVA Orchestra has been on the cutting edge of the modern big band scene since its founding in 1992. Among its ranks are some of the most versatile and talented musicians in jazz (including, most recently, saxophonist Roxy Coss, one of our Artists to Watch for 2019). Based in New York, the group maintains a busy international touring schedule, and is a reliable booking for today’s top jazz festivals (they’ll be at the National Women’s Jazz Festival in Middletown, Wisconsin, July 4-7). Known for their innovative original compositions and invigorating arrangements of pop and jazz standards, The DIVA Orchestra has attracted numerous high-profile artists to sit in as featured guests, including jazz vocal icons Diane “Deedles” Schuur and Ann Hampton Callaway. Here they are in a 2001 video performing a collection of tunes with vocalist Nancy Wilson, who passed away in December of last year.

The MOSAIC Project grew out of a 2011 album of the same name by drummer Terri Lyne Carrington, whose initial idea was to feature today’s top female vocalists backed by an all-female ensemble. The album — which featured a core rhythm unit of Carrington on drums, Geri Allen on piano, and Esperanza Spalding on bass — won a Grammy the following year. In 2015, Carrington revisited the project for the album Love and Soul, which featured a similar lineup of musicians but leaned on a heavier R&B and gospel sound.  Critically and popularly admired, the band has kept up an active touring schedule. Here they are from a performance in 2012 at the Red Sea Jazz Festival in Israel, where they were joined by Dutch artist Tineke Postma on soprano sax.

Maqueque is spearheaded by four–time JUNO Award winner, two–time GRAMMY Award nominee and Officer of the Order of Canada recipient Jane Bunnett, one of today’s leading soprano saxophonists. The project is an assembly of all–star Cuban musicians brought together and mentored by Bunnett, including Yissy Garcia on drums, Dánae Olano on piano, Melvis Santa on percussion and vocals, Celia Jiménez on bass and Magdelys Savigne on batá drums and congas. The group’s 2016 album Odara was one of the finest releases of the year, and set off a whirlwind touring schedule that included frequent trips to Cuba. Here’s the group in 2017 performing “Café Pilon,” a tribute to an adored brand of Cuban coffee.