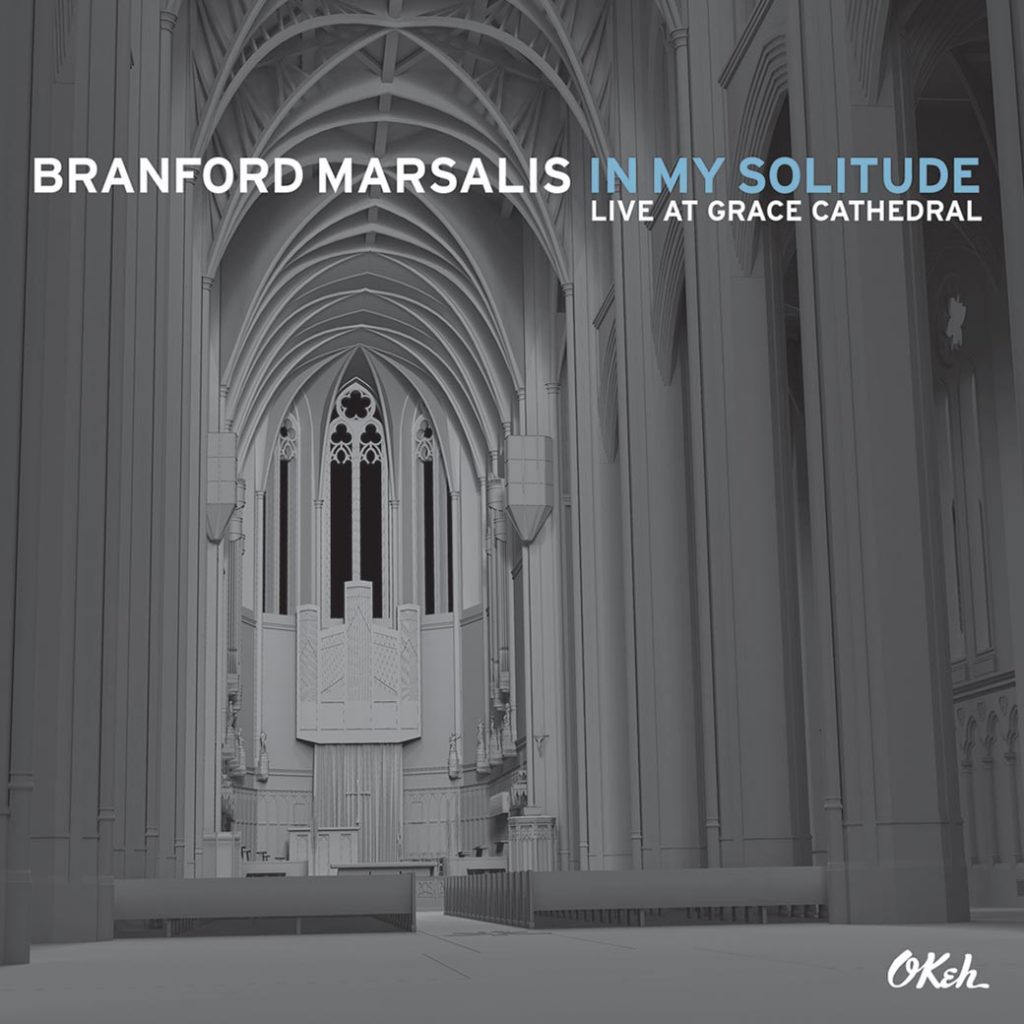 In My Solitude: Live at Grace Cathedral
(OKeh)

Apart from its many virtues, and its status as Branford Marsalis’ first solo-saxophone recording and concert, In My Solitude: Live at Grace Cathedral earns high praise as an example of a musician “playing the room” in a most sublime way. Of course, this is not just any room, but the glorious — and gloriously ambient and reverberant — Nob Hill cathedral that has hosted concerts for the San Francisco Jazz Festival and others.

On October 5, 2012, Marsalis took the stage of the cavernous venue, tenor, soprano and alto horns in tow. His program showcases the breadth of his musical vocabulary, including the opening salvo of Steve Lacy’s “Who Needs It,” a piece by C.P.E. Bach, original compositions like “The Moment I Recall Your Face,” and four impressive improvisational creations. Clearly, he also appreciated and adapted to the sonic/spiritual/historic vibe of the space, which becomes an integral part of the musical whole.

Although Marsalis titled the album In My Solitude, he doesn’t include that Ellington classic in the mix. Besides its relevance to his unaccompanied performance, the title alludes to Ellington’s sacred concert in this space in 1965. Marsalis does present an elliptical version of the standard “Stardust,” but otherwise, he’s off and running and detouring into diverse musical corners. His angular rendering of Japanese composer Ryo Noda’s “Mai, Op. 7” is the longest — and most abstract —venture here, veering into free jazz and timbre-tweaking terrain, and again, fully embracing the acoustics of the space. But his playing turns more tonal and impressionistic on the next two improvisations, before he grounds it in the easier-does-it “Blues for One.”

Bringing the wide-ranging set to a close, Marsalis calls on a sweet nostalgic twist — the theme “I’m So Glad We Had This Time Together,” from The Carol Burnett Show. Agreeably sentimental but treated with witty surprises, the piece recalls Wayne Shorter’s solo rounds of “Thanks for the Memories” during concerts with Weather Report. In My Solitude duly documents Marsalis’ moving, virtuosic and graceful contribution to the slim ranks of successful solo-saxophone projects. It couldn’t have happened in a more ideally interactive place. —Josef Woodard