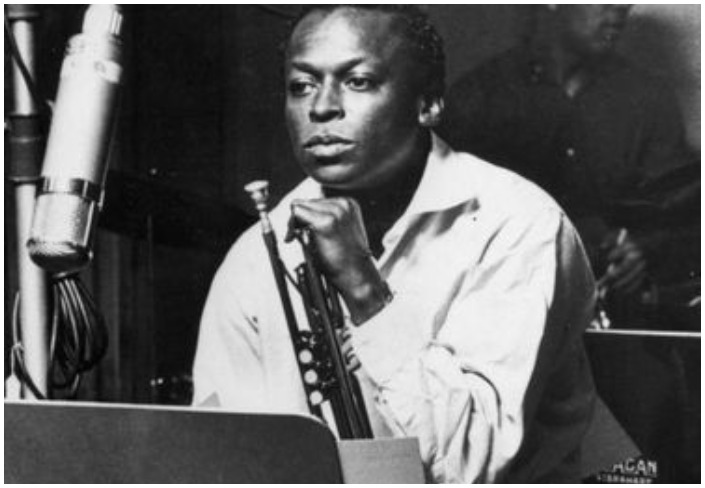 “Blue in Green” was first recorded on March 17, 1959 by trumpeter Miles Davis, pianist Bill Evans, drummer Jimmy Cobb, bassist Paul Chambers, and saxophonist John Coltrane. It is the third track, as well as one of two ballads, on Davis’ Kind of Blue, released by Columbia Records on August 17, 1959. It is also the only track on the legendary modal jazz album not to feature saxophonist Julian “Cannonball” Adderley.

Although Davis claimed to have composed all of the tracks on Kind of Blue, it has long been speculated that Evans at least co-wrote “Blue in Green.” Whether or not this is true, his contribution to this recording has been praised by many critics, including Allmusic‘s Thomas Ward, who argued that “Blue in Green” is the most beautiful piece of music on the album, and wrote that Evans’ piano part “is magnificent, and his solo a masterpiece of unrivalled lyricism.”

Davis admired Evans and once stated that “he plays piano the way it should be played.” Nonetheless, when the pianist approached him to get a share of the song’s royalties, the trumpeter allegedly wrote him a check for 25 dollars.

Shortly after Kind of Blue‘s release, “Blue in Green” achieved jazz standard status. It has since been interpreted by many musicians. Al Jarreau, for instance, recorded two parts of the song for his 1992 album Heaven and Earth. This version is now regarded as a demonstration of his prowess as a vocal interpreter and scat singer. More recently, a drummerless reading of the song was included on In Movement (2016) by saxophonist Ravi Coltrane, bassist Matthey Garrison and Jack DeJohnette, usually on drums, here on piano.