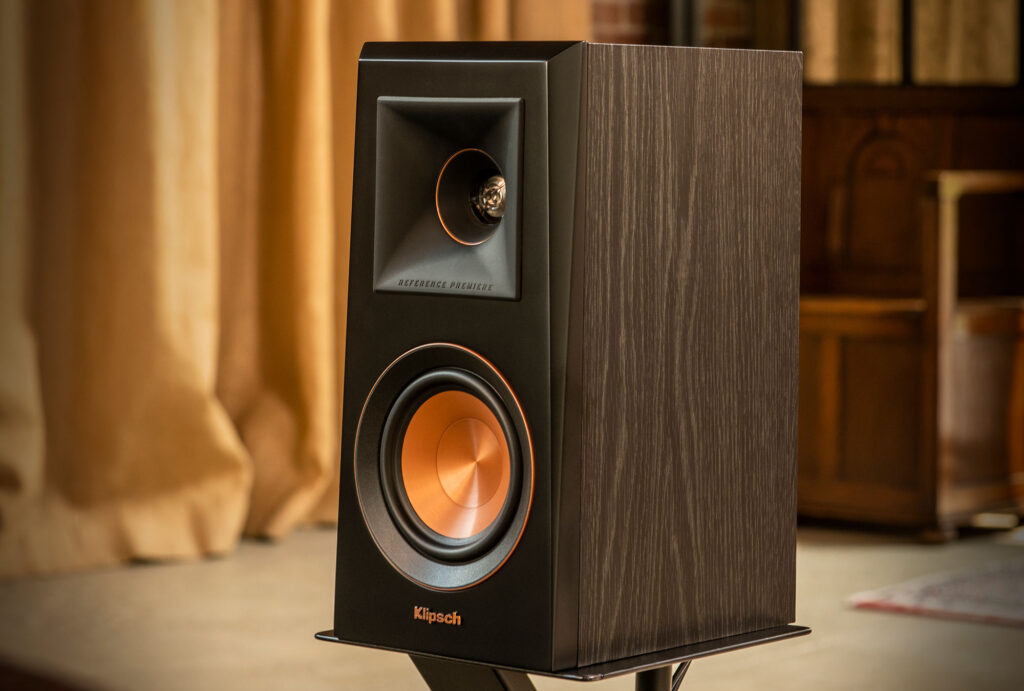 When done properly, low powered tube amplifiers and horn-loaded loudspeakers are two of high-end audio’s greatest contributions to the enjoyment of music in the home. The audiophile community has embraced this combination at various points over the past sixty years but the explosive growth of active and wireless smart loudspeakers has made this combination a much harder sell outside of a tiny niche of listeners. Is it time to throw in the towel and go wireless active or has Klipsch flipped the argument on its head with the RP-600M?

The Klipsch Reference RP-600M loudspeakers ($549.00/pair) benefit from some trickle down technology borrowed from its more expensive siblings in the Heritage line-up, and it’s ironic that audiophiles who swore for the past few decades that they would never be caught dead with a pair of Klipsch are lining up to buy them now. Apparently, there is something to the Klipsch sound that people really like.

At their asking price, the RP-600M are not without some level of compromise; using the wrong amplifier and not paying attention to set-up affects their performance just enough to make them an exciting listen at first, but not very fulfilling over the long haul. Getting things right with the Klipsch RP-600M from the very beginning will change how you perceive your music collection for many years to come. 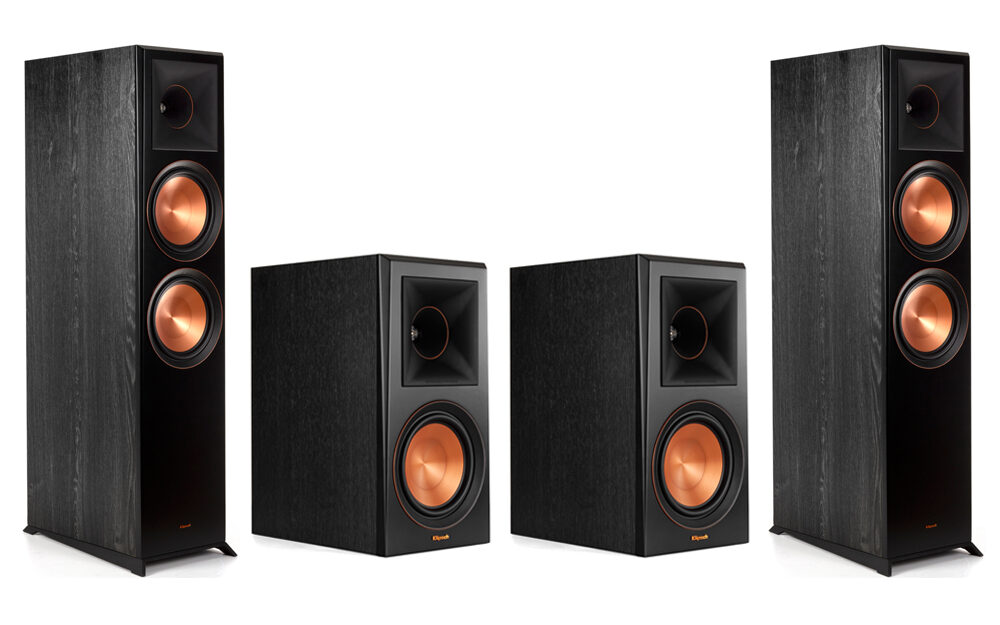 Music has a presence that few loudspeakers priced below $1,000 can really match; competing products from Quad, Wharfedale, Polk Audio, PSB, KEF, and Paradigm all do a very fine job with all kinds of music, and offer a well-rounded presentation – but they don’t have the swagger of the RP-600M. Some might find the RP-600M to be too much of a good thing, but they are probably using the wrong amplifier if that’s the case.

Klipsch loudspeakers have a reputation for being forward/bright sounding, and while there is certainly a lot of top-end energy and detail emanating out of the RP-600M’s 1-inch titanium-dome tweeter with hybrid cross-section Tractrix horn, the loudspeaker never really crosses that line. If anything, the RP-600M are the most laid-back sounding pair of Klipsch loudspeakers that I have heard over the past 25 years.

Horns, in particular, have a healthy degree of bite and tone making them a vibrant listen with great jazz recordings like Hank Mobley’s Workout (Tidal/MQA) and Donald’s Byrd A New Perspective (Tidal/16-bit/44.1 kHz). Byrd’s signature track “Cristo Redentor” had me a little nervous leading up to the moment where his trumpet enters, but the combination of the RP-600M along with a number of warmer sounding amplifiers from Schiit Audio, Heed, Cambridge Audio, and AmpsandSound retained all of the magic without a loss of detail.

The RP-600M’s 6.5-inch Cerametallic cone woofer does an admirable job with vocals but nobody will ever confuse it for a paper or polypropylene driver; there was a slight hardness on some recordings like Sam Cooke’s Night Beat (Tidal/16-bit/44.1 kHz) that I have never heard when playing tracks like “Lost and Lookin’” though the Quad S-2, PSB Alpha P5, or Wharfedale Diamond 10.1s.

Switching over to my vinyl copy of the aforementioned album, there was less of an edge in the upper midrange compared to the same tracks when streaming via Tidal, but it’s clear that the Klipsch sacrifice some midrange warmth for a sharper edge, and more immediate sounding presentation. It’s not a bad thing if you can balance it out with an amplifier or sources that dial back the RP-600M’s exuberance – but it’s clearly there.

If you’re looking for a bass-heavy two-way loudspeaker, the RP-600M get you part of the way there – but not completely. Having spent time recently with the Forte III, and La Scala II, I’ve noticed a bit of a trend with Klipsch loudspeakers and bass response. If you’re looking for subterranean bass response that will rattle your walls, the RP-600M are going to leave you hanging somewhat; what you get instead is quick, tuneful bass that is somewhat on the lean side depending on your choice of amplifier.

Listening to Aphex Twin’s “To Cure a Weakling Child” (Tidal, 16-bit/44.1 kHz) made it pretty clear that the RP-600M are very adept with electronica; the track energized my 16 x 13 x 9 den with relatively tight bass that was fairly extended, but there is no question that it could have benefitted from a subwoofer.

If you can pull them 2-3’ from the front wall, they do a reasonable job recreating the space between you and the musicians, but there is a trade-off in tonal balance and bass response. Because they are rear-ported, I left them 26” from the wall and that proved to be a good compromise in my listening space; the RP-600M sounded fuller to my ears pointed straight ahead and 72” apart.

Another positive was their overall appearance, which earned a lot of positive comments from both family and friends who walked past them during the review process. Most people didn’t believe the price and were not turned off by their size (15.7” H by 8″ W by 11.9″ D). The magnetically attached grill covers reduce the overall output by 1dB and there is no question that they impart a tiny veil over the sound. The RP-600M do require robust loudspeaker stands if you really want to pull every last bit of performance out of them. 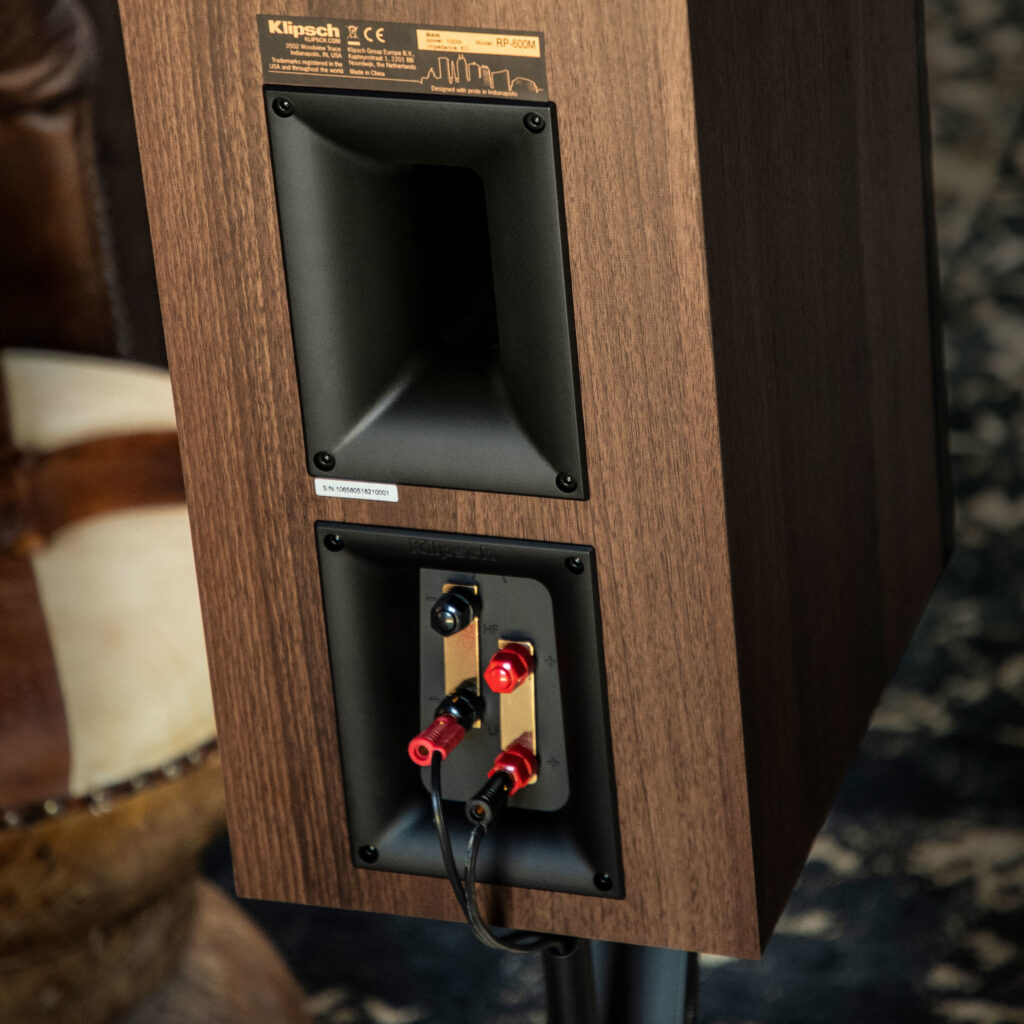 The RP-600M are efficient, high-sensitivity loudspeakers but Klipsch’s claim of 96dB/W/m is not something that I was able to verify. Every amplifier will make the RP-600M sound different; low-powered tube amplifiers carved out the best sound, but 25-50 watts from the right amplifier will be more than you ever need.

The RP-600 are above average in the imaging department, but don’t expect them to reproduce a palpable, three-dimensional soundstage in your room.

There is a slight level of hardness in the upper midrange that may bother some people with vocals depending on your amplifier. If you stick with warmer sounding amplifiers or sources, the issue will probably never rear its ugly head; and you’ll think they have unbelievable presence.

At $549, the Klipsch RP-600M are capable of over-achieving with the right electronics. Drive them with a cheap receiver, or even expensive analytical sounding amplifier and you will find very little joy with them. Connecting them to something like the Schiit Audio Aegir or Ragnarok 2, Heed Elixir, or any robust sounding EL34/EL84 tube amplifier will be a match in sonic heaven and end the argument that inexpensive loudspeakers can’t move you emotionally. A future classic.

BUY IT ON AMAZON: