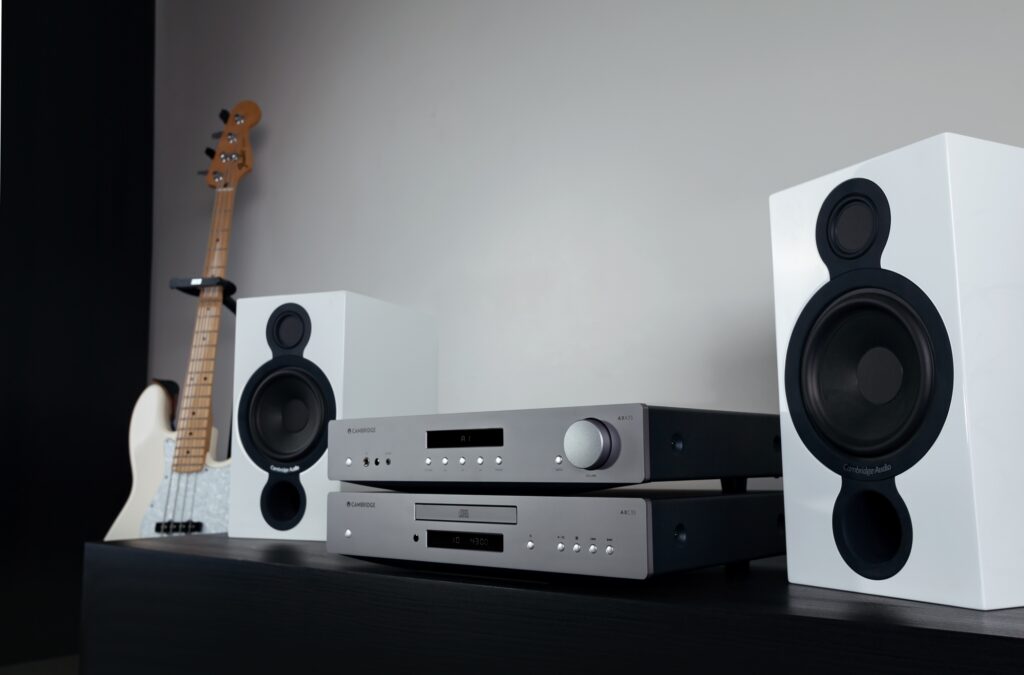 Sitting across from a pair of brand new Sonos Ones that grace my spare bedroom, I was struck by how much audio one can buy for $350 in 2019. The Sonos may not be the last word in sound quality, but the combination of wireless audio, voice control, and access to a lot music makes them a compelling purchase for many consumers.

The $350 Cambridge Audio AXA integrated amplifier may not offer the wireless connectivity, voice control, or loudspeaker feature of the Sonos, but it does offer two things that make it a much smarter buy long-term – room for growth, and far superior sound quality.

There is a new generation of affordable high-end integrated amplifiers from Cambridge Audio, NAD, Denon, Audiolab, Cyrus, and Schiit Audio that are making better sound quality attainable for music listeners who don’t want to throw in the towel and be captive to a specific ecosystem and sound. The AXA35 happens to be the most affordable and over-achieving of the lot.

The AXA35 feels substantial at this price level; thirteen pounds of aluminum and steel that is well assembled and finished with a quality looking front faceplate and ventilated top cover. It can look slightly understated compared to the competition, but Cambridge Audio has created an amplifier that sounds surprisingly larger than it looks. 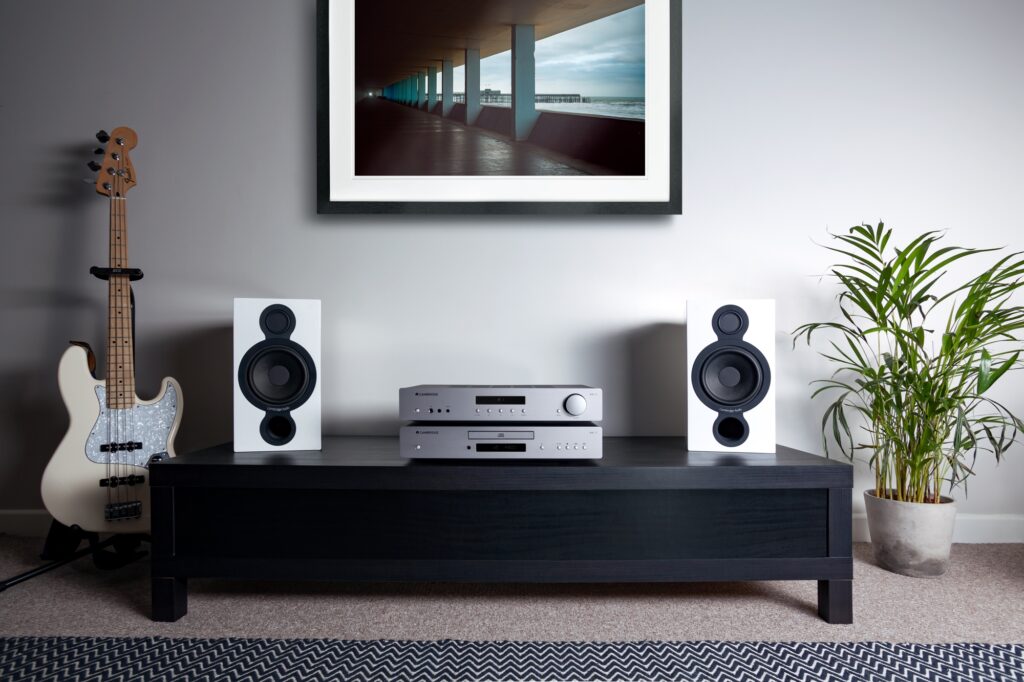 Under the hood, everything is very tidy and neat, with a sizable toroidal transformer occupying the front left corner of the chassis. The AXA35 offers 35 watts/channel into 8 ohms but proved to be a lot more powerful in real use with most loudspeakers.

The rear panel includes input jacks for five sources; including a phono section designed for a high-output moving magnet, or high-output moving coil cartridge. Cambridge Audio have also included a USB input for charging your smartphone. If we have one nitpick – the binding posts are decidedly cheap for a brand that makes equipment in the $5,000 range.

The supplied remote control is a full-sized unit that you’ll find in the box of other Cambridge Audio components and offers complete control of the unit.

Some may find the AXA’s understated styling somewhat bland compared to the industrial design from its rivals, but the real focus should be on sound at this price point. If you’re looking for a one-box solution that includes an internal DAC, Bluetooth connectivity, and fancy touch-panel LCD display for $350 – you’re going to be looking for a very long time.

You need a DAC with the AXA35. Something like the AudioQuest DragonFly Cobalt, or Schiit Audio Modi Multibit will work perfectly and keep the price affordable.

There is something undeniably surprising about the Cambridge Audio AXA35 integrated amplifier. Great sounding affordable amplifiers are not hard to find anymore, but they don’t get your pulse racing right out of the box – they lack a level of sophistication at the entry-level that obscures detail, shrinks the soundstage, and can sound a tad opaque.

With a tonal balance that falls somewhere in-between neutral and warm, giving everything a decent amount of meat but without obscuring detail that a speaker like the Klipsch RP-600M can unveil, the AXA35 is never going to offend your ears. What it leaves behind is those last few pieces of information that you need to spend a lot more to hear.

Listening to Hank Mobley’s Workout (Tidal, 16-bit/44.1kHz) through the Klipsch RP-600M revealed the AXA35 can keep up with the music; it moved forward in a way that never robbed the Klipsch of their strong and ever-present midrange energy, but also made them more listenable by softening some of the glare created by metal cone drivers, and horn-loaded tweeters.

The AXA35 does not possess a vise-like grip on the bottom end; but it does deliver a surprising degree of punch with the right loudspeaker; the Klipsch RP-600M, and PSB Alpha P5 both benefitted from that with alternative rock like the Smashing Pumpkins or Massive Attack’s Mezzanine.

Jazz was a solid match with the AXA35. Donald Byrd’s “Cristo Redentor” from A New Perspective (Tidal, 16-bit/44.1kHz) can be an unrelenting listen if a system leans too far forward, but that was never the case with either loudspeaker and the AXA35. Byrd’s trumpet emerged from the silence with just enough bite to keep one on the edge of their seat without reaching for the volume button. 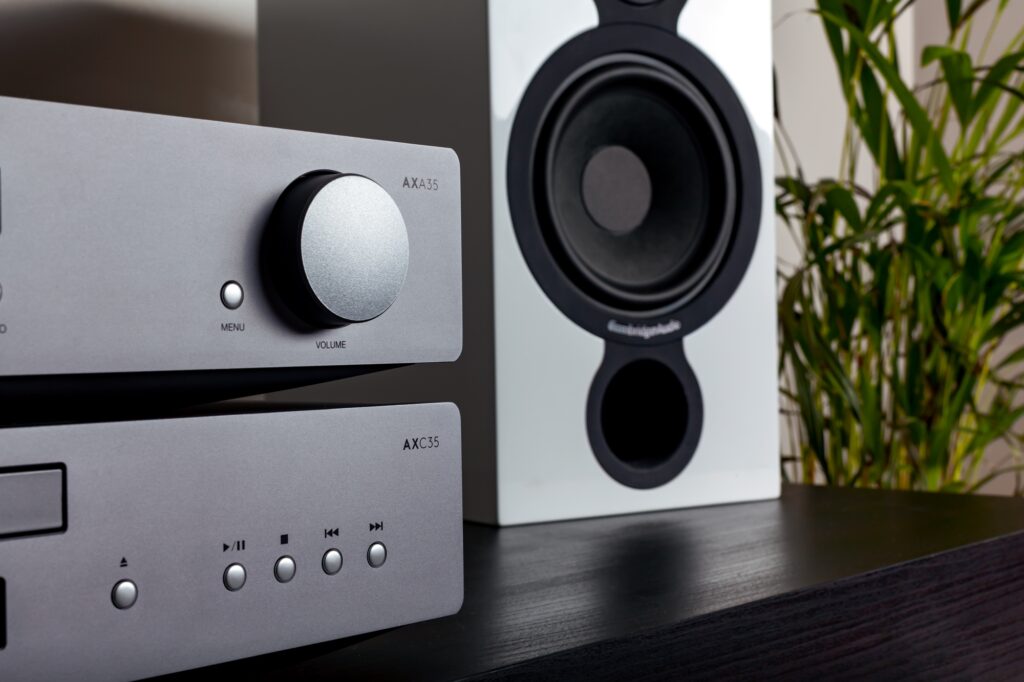 Both products cost the same amount of money, and even though the PSB Alpha P5’s quoted sensitivity rating seems a tad generous based on my experience with five amplifiers, there was a synergy with these two products that I couldn’t better.

The Alpha P5 require some punch to deliver sufficient low end response, and the AXA35 delivered with almost every track; Metallica’s “One” from And Justice for All (CD, 16-bit/44.1kHz) energized my den and it never sounded like the wheels were coming off the train. The P5 could benefit from a subwoofer, but in a den, office, or bedroom – this combo was engaging, detailed, and listenable for hours.

Vocals were always impressive with the AXA35; both with digital sources, and the three phono cartridges that I ran through its phono section; Dynavector 10×5, Grado Black1, and Nagaoka MP-200. I’ve certainly heard better sounding phono sections, but what the AXA35 delivers with a good cartridge is more than sufficient.

Should you pull the trigger?

Paired with the right loudspeakers, the Cambridge Audio AXA35 will surprise you with its warm tonal balance, swagger, and unbridled presence with all types of music. It does lack an internal streamer and DAC, so that needs to be figured into the final cost if assembling a system around it.

At its asking price, the Cambridge Audio AXA35 is an unqualified success for music lovers debating between a pair of affordable active loudspeakers or true two-channel system that will deliver superior sound quality and room to grow. Highly recommended.

A Musical Boost: 5 Phono Pre-Amplifiers That Will Make Listening to Vinyl Better When Working Remotely

Great Sound and Mobility: Our Favorite Wireless Headphones for Working from Home