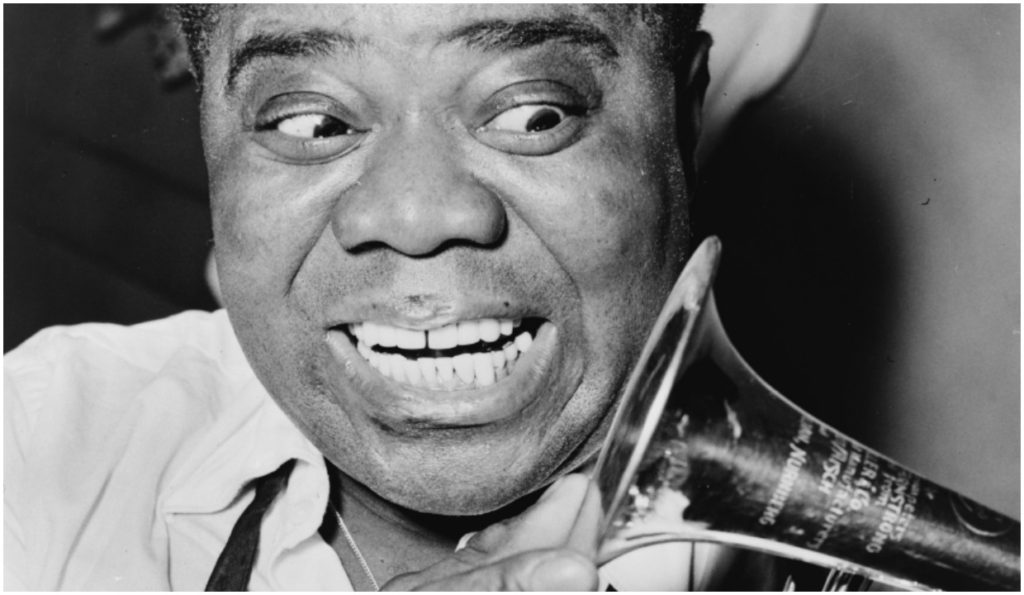 In the ’20s and ’30s, marijuana was the jazz world’s drug of choice. Many musicians made use of it and accepted it as a gift from fans and well-wishers. An entire body of songs written during those years was created around it. Though most whites and non-musicians were unaware of it at the time, such terms as “vipers” and “kickin’ the gong around” referred to marijuana. They were part of a language that mostly originated from traveling jazz musicians who quickly went from one city to the next in those early and rudimentary tours, smoking joints to help them deal with the hardships of the road, poor travel conditions and the discrimination they found along the way.

The viper lingo found its way into the title of many instrumental and vocal recordings, such as Don Redman’s “Chant of the Weed” (1931), Cab Calloway’s “Reefer Man” (1932) and Louis Armstrong’s “Muggles” (1928). In the hilarious second part of Armstrong’s 1933 recording of “Sweet Sue, Just You,” the trumpeter translates saxophonist Budd Johnson’s “viper-language” jibberish into English for the benefit of non-vipers.

Marijuana-smoking musicians referred to themselves as vipers. Now, the term is also accosted to such flamboyant and eccentric showmanship of the time as that of Calloway and Stuff Smith, who openly and happily referred to their habits. Armstrong was the quintessential embodiment of a viper. He started smoking marijuana in the ’20s and never looked back. He strongly believed in its health benefits, as well as its ability to help him get into the music more and play better. Marijuana, he once said, “relaxes you, makes you forget all the bad things that happen to a Negro. It makes you feel wanted, and when you’re with another tea smoker, it makes you feel a special kinship.”

Marijuana’s influence on jazz was not restricted to the United States; it also fueled jam sessions on the French bandstands. On November 25, 1937, Django Reinhardt and the Quintette recorded a tune titled “Viper’s Dream,” a jazz stomp so moody that Michael Dregni defines it as “almost a caricature of jazz.” Paris had, by then, become a European jazz hotspot. Many American jazz artists, including Armstrong, made the trip there and were readily greeted by adoring fans who welcomed them with open arms.

Armstrong first visited Paris in 1932 and received a hero’s welcome. He returned in 1934 and lived there at the Hotel Alba Opéra in the 9th arrondissement until the following year. On October 1934, he waxed a total of seven sides in the French capital. Most of the songs he recorded at this session were tried and tested tunes, such as “St. Louis Blues” and “On the Sunny Side of the Street.” But the set ended with a new tune called “Song of the Vipers,” which was intended as Armstrong’s ode to his fellow marijuana smokers

Ricki Riccardi calls this song “ethereal,” praising Armstrong’s flights into the upper register, pulling superhuman feats of endurance just by holding demanding notes. Indeed, the song is impressive, underlined by a spirit of freedom and experimentation, lightly shifting moods and tones in exciting and surprising ways. The song remained a hidden gem of Satchmo’s discography for many years. Because of its theme, it was deemed too controversial for a wide release, particularly in the United States, where marijuana, along with other recreational drugs, started becoming illegal from the late ’20s onwards in most states.

In reference to the ’30s anti-marijuana drug laws, the trumpeter once said: “At first it was just a misdemeanor, but then you lost the ‘mis-de’ and you just got meaner and meaner.” But the laws did little to deter his love for “gage” and in 1930, he became the first celebrity to be arrested for smoking a joint. It happened during a break while playing at L.A.’s famed Cotton Club. He and his drummer Vic Berton were arrested there; both were sentenced to jail for six months and $1000 each in fines.”

Again, the incident did little to discourage his marijuana smoking habits. Even when marijuana stopped being the drug of choice for jazz musicians (replaced, with devastating consequences, by heroin) and before “vipers” became an old-fashioned term, Armstrong remained true to it. “It really puzzles me to see marijuana connected with narcotics … dope and all that crap,” he once said. “It’s a thousand times better than whiskey – it’s an assistant – a friend.”