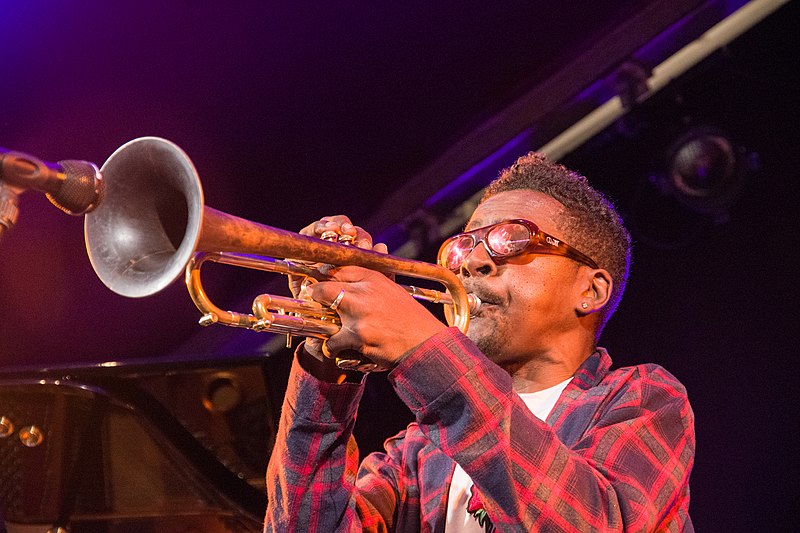 Trumpeter Roy Hargrove, an immensely skilled trumpeter whose melodic, groove-centric style bridged a divide between straightahead jazz, hip-hop and R&B, died November 2 in Manhattan. He was 49. The cause of death, according to his manager, was cardiac arrest brought on by kidney disease.

Born in Waco, Texas, and raised in Dallas, Hargrove was a naturally gifted musician who showed early signs of virtuosity. A local phenom in the Fort Worth and Dallas jazz scenes, he was discovered while still in high school by trumpeter and jazz tastemaker Wynton Marsalis, who would eventually take the young horn player on a European tour. After studying at Berklee College of Music in Boston, Hargrove moved to New York City, where he became a frequent presence at the now-shuttered jazz club Bradley’s, a beacon for straightahead jazz in New York City during the 1990s.

Hargrove’s style — which was largely informed by blues, funk and soul — represented something of a departure from the “Young Lion” trumpet players of the latter 20th century, who were focused on reviving the languages from jazz’s past. On early recordings, such as his debut, Diamond in the Rough (Novus, 1990) and The Vibe (Novus, 1992), Hargrove seemed intent on developing a language that would serve jazz’s future, which meant embracing the sounds of contemporary American pop.

His penchant for hybridity would lead him to important crossover work with artists like neo-soul singer Erykah Badu, drummer Questlove, vocalist D’Angelo and rapper Common, who together formed the musical collective The Soulquarians. Hargrove was a formidable presence on albums recorded by fellow Soulquarian members, including D’Angelo’s masterpiece Voodoo and Common’s Like Water For Chocolate. Several members of the group would appear in recordings by the trumpeter’s own groundbreaking group, The RH Factor, which served as an early pacesetter for the jazz-meets-rap trend that would launch the careers of Kamasi Washington and Kendrick Lamar.

For all his genre-defying innovation, Hargrove was also a studious disciple of the jazz tradition, and would record several outstanding albums in the bebop and hard-bop veins. His career included notable sideman credits alongside some of the biggest names in jazz, including Sonny Rollins, Bobby Watson, Mulgrew Miller and Kenny Washington. In 1997 he recorded the Afro-Cuban jazz album Habana with his band Crisol (featuring Gary Bartz, David Sanchez and Frank Lacy, among others). The album was heralded for its groundbreaking approach to traditional Latin music, winning the Grammy Award for Best Latin Jazz Performance in 1998.

In 2003, Hargrove would win his second Grammy Award for Directions In Music: Live at Massey Hall, which featured a modern jazz dream team of Herbie Hanock on piano, Michael Brecker on saxophone, John Patitucci on bass and Brian Blade on drums.

In the wake of Hargrove’s death, fans and fellow musicians took to social media to remember the pioneering trumpeter. “He played with an unusual and infectious combination of fire, honesty and sweet innocence,” Wynton Marsalis wrote in a Facebook note. “The first time I heard him it was clear, he was an absolute natural with phenomenal ears, a great memory and tremendous dexterity on our instrument.”

Saxophonist Antonio Hart, a longtime partner in Hargrove’s quintet, took to Facebook to post his gratitude for his mentor: “He’s at peace with God and the other masters now,” he wrote. “Let’s remember his genius, and the joy he has given the world.”

As with all of the phenomenal musicians in our “Life in Music” series, it would be impossible to summarize Hargrove’s outsize impact on music in just five songs. Nevertheless, here are some of our favorites. We hope that, in the words of Antonio Hart, they can bring some joy into your world.

1. “Soppin’ the Biscuit,” Roy Hargrove Quintet, from With the Tenors of Our Time (UMG)

3. “The Sorcerer,” Herbie Hancock/Michael Brecker/Roy Hargrove, from Directions in Music