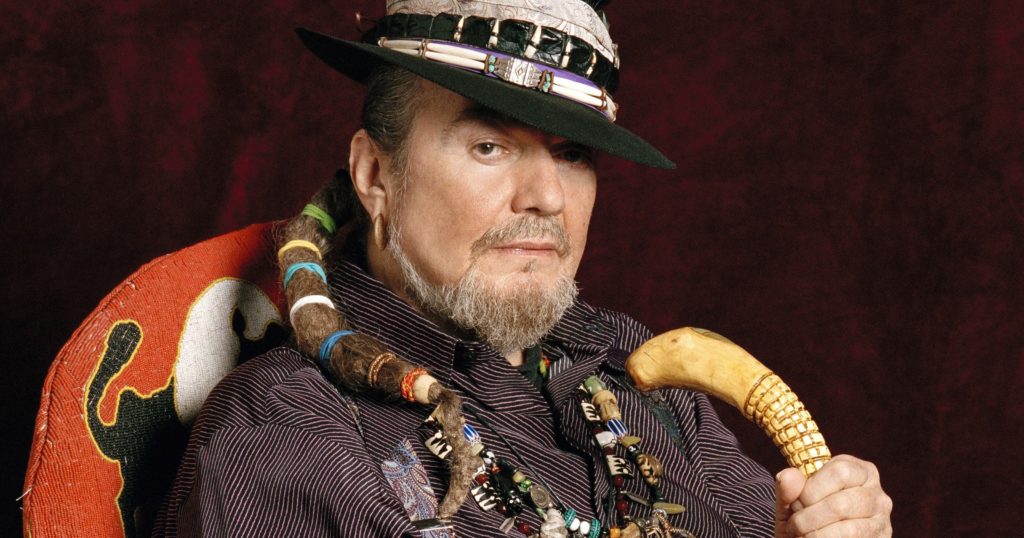 Dr. John, the legendary New Orleans singer-songwriter whose music came to define the sound of his city, died June 6 of a heart attack. The Rock and Roll Hall of Fame inductee and six-time Grammy winner was 77.

From his sound to his dress to his stage presence, Dr. John was the embodiment of New Orleans, a voodoo-chanting, headdress-wearing witch doctor whose vast recorded output — including 30 studio albums and numerous other live recordings — formed a beautiful mosaic of his city’s sounds and rhythms. Though his music drew from various sources — from jazz and blues to rock, gospel, funk and much else — his legacy will always be that of a true original. We remember his contribution to the music world via his most famous songs, which can be streamed via the player below. A full obit follows.

Dr. John was born Mac Rebennack in 1941 in the city’s 3rd Ward — a birthright he shared with Louis Armstrong — and grew up in a musical family, playing ragtime and blues with his aunts, uncles and cousins. But it was his father, a well-connected owner of an appliance store, who turned young Rebennack on to the music that would become his calling card, first with the jazz recordings of Louis Armstrong, and later through rock and roll icons like Little Richard and Professor Longhair.

Rebennack began his musical studies as a guitar player, showing promise from an early age. At 16, he had been hired as a producer at Ace Records and was playing in various gigs around New Orleans. Before long, he became an in-demand session musician, appearing on albums by local musicians and even forming his own band, Mac Rebennack and the Skyliners. After a gig in Jackson, Mississipi, in 1960, Rebennack was involved in an incident with a handgun that would lead to him losing the ring finger of his left hand, essentially ending his career as a guitar player. Intent on staying in the music industry, he learned to play the piano, modeling his sound — as well as his attire — on his former hero, Professor Longhair.

In 1960s he began to assume the identity of Dr. John The Night Tripper, a nickname given to him by local musicians in deference to his larger-than-life stage presence and shamanistic way of speaking. He recorded his first album, Gris-Gris, in 1968 on the Atco label. At the time, it received praise from critics for its heady mix of traditional New Orleans music and psychedelic funk. The album would also spawn a few of Dr. John’s most enduring hits in “Gris-Gris Gumbo Ya Ya” and “Mama Roux.” He would remain on Atco through the 1970s, a decade that would see the release of standout albums like Sun, Moon and Herbs, which featured cameos from Mick Jagger and Eric Clapton. And in 1973, he would release what was perhaps his most famous album ever, In the Right Place, which featured the singles “Such a Night” and “Right Place Wrong Time.” The latter would become Dr. John’s highest-charting hit, spending 33 weeks in the Billboard Top 100 and peaking at No. 24.

In 1989 Dr. John released In a Sentimental Mood on Warner Bros., an album that found him pivoting toward jazz standards. The album included covers of the Duke Ellington-penned title track and “Love for Sale” by Cole Porter, and featured jazz icons like Marcus Miller on bass and David “Fathead” Newman on saxophone. As a testament to Dr. John’s jazz bona fides, the album would go on to notch a Grammy for Best Jazz Vocal Performance.

In the aftermath of Hurricane Katrina, Dr. John became a powerful spokesperson for his city and a symbol of its undying artistic spirit. In 2005, he released the EP Sipiana Hericane on Blue Note Records, with proceeds going to hurricane relief. Three years later, he would release The City that Care Forgot, which addressed both the resilience and neglect of the city’s storm-battered residents. The album, which featured guest spots from Willie Nelson, Terence Blanchard and others, would eventually win the Grammy for Best Contemporary Blues Album.

Dr. John was inducted into the Rock and Roll Hall of Fame in 2011 and the following year would release yet another Grammy-winning album, Locked Down. Quite fittingly, his final studio recording, 2013’s Ske-Dat-De-Dat: The Spirit of Satch, was a tribute to Louis Armstrong, his earliest musical hero.