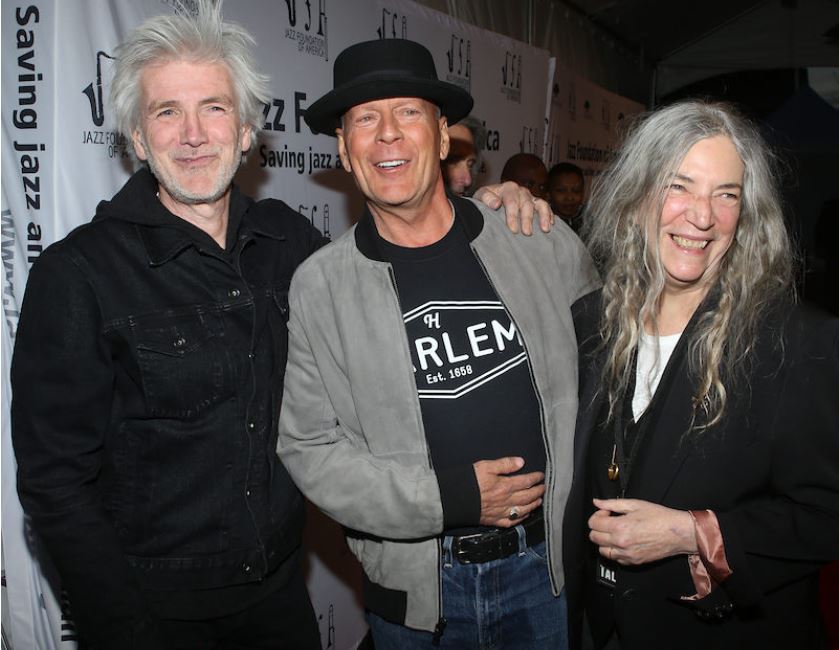 Tony Shanahan  (left), Bruce Willis and Patti Smith were among the musicians and actors who turned out at the Apollo Theater on April 4 in New York City. (All photos: Udo Salters)

The Jazz Foundation of America has been doing sterling work for three decades, raising funds that are mostly destined for elderly musicians that may be prey to loss of work through illness, high medical costs or even potential homelessness. Although the advanced in age are most likely to be recipients, the JFA is also ready to support younger artists who are struck down unexpectedly, either by disease or sudden accident.

A glitzy crowd pretty much sold out the venue, representing the Harlem jazz scene and beyond, contributing principally by purchasing tickets for the show, but also encouraged to pledge via cellphone during the proceedings. Founding director Wendy Oxenhorn is a devoted figurehead, and even though Danny Glover was the official host, she became a pivotal presence, inviting previous beneficiaries onstage, and making pointed societal observations without being overtly political.

The show took place on April 4, the anniversary of Martin Luther King’s assassination (honorees Belafonte and Bennett were both heavily involved with the Civil Rights movement). Bernie Sanders was the first surprise guest, relating his strong connection with Belafonte. April 4 was also the birthdate of Muddy Waters, prompting a strong dose of the blues at the climax of the night’s program.

There was unexpected opening to the proceedings, with tap dancer Savion Glover performing a duet with tenor saxophonist Patience Higgins, setting up a light-footed thunder that immediately established an energized mood. The Count Basie Orchestra swept through “April In Paris” (or “April In Harlem”!), and as a nod to Quincy Jones, sitting in the front row, they recalled his period of penning and arranging for Basie, with a rolling version of “Li’l’ Ol’ Groovemaker.”

Ben Stiller, ever the satirist, revealed that Tony Bennett was his father, as confessed to him by his mother, then handing over his lifetime achievement award and leaving the stage for this magisterial crooner to sing “Our Love Is Here To Stay” and “I Left My Heart In San Francisco.” The resultant standing ovation was not surprisingly intense and extended.

Patti Smith gave another of the evening’s most charismatic performances, joined by regular guitarist Lenny Kaye, instantly working up to an articulate, shamanic pitch, hands beseeching, voice starkly resonant. She really should have been given two songs, but still managed to completely impose her preacher’s strength during the uncompromisingly selected “Pissing In A River.” It was the night’s moment of condensed greatness.

Bettye LaVette powered through “Abraham, Martin & John,” a song first recorded by Dion. She returned later, at the afterparty, fronting the smoking blues jam band for a number, striding through the middle of the crowded dancefloor. Trumpeters Wallace Roney and Keyon Harrold paid tribute to the departed Hugh Masekela, delivering his biggest hit, “Grazing In The Grass.” This was an amazing night of significant dates, as April 4 is also Masekela’s birthdate.

Common fronted the August Greene collective, resourcefully freestyling to reflect the event, pacing around the front of the stage. Common chose to perform “Black Kennedy” and “The Light,” the latter from his 2000 album Like Water for Chocolate.

The best set of the show came right at the end, where the blues combo had a chance to stretch out and raise the frazzling levels, fronted by veteran blueswoman Sweet Georgia Brown, seated but strong. Bruce Willis displayed his strong harmonica-blowing skills, but Oxenhorn also took up her harp, giving a good showing with her fiery solo. Guitarist Ronnie Baker Brooks also seared through the show’s most electrifying solo. This was the set where the musicians let go, setting the stage alight, making the blues this evening’s dominant musical style. Of course, the JFA has always embraced this music, along with soul, gospel, R&B, and all of jazz’s satellite forms. — Martin Longley

Song of the Day: George Benson – “Give Me the Night”