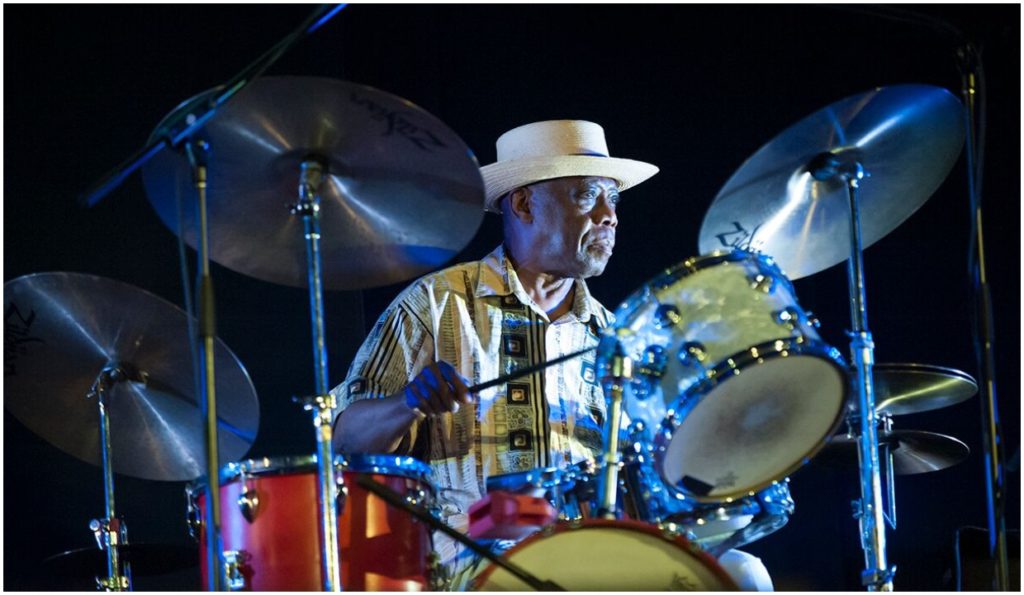 Drummer Andrew Cyrille will be honored with a Lifetime Achievement Award at the 24th Vision Festival, running June 11-16 in Brooklyn, New York.

The 24th Vision Festival will take place at the Roulette Intermedium in Downtown Brooklyn, New York, on June 11-16. Produced by the non-profit Arts for Art and proclaiming its theme of “Jazz for the Free World,” the festival gathers an international community of artists and audiences for six days of performances rooted in avant-garde jazz and improvised music, spiraling out across poetry, visual art, dance, performance art and social activism. Tickets are available now. Click here to purchase.

This year’s Lifetime of Achievement honoree will be the master drummer, composer and bandleader Andrew Cyrille. As such, the festival will open on June 11 with the legendary avant-garde jazz drummer centerstage for an evening of performances, each party of the prismic array of his creative alliances, that will play out mostly in duos and trios and touch on many of the most compelling facets of his music and its influences. Listen to a playlist of Andrew Cyrille music via the player below.

“[Cyrille] brings together elements of Haiti, marching bands, traditional bebop drumming plus the whole Free Jazz scene with his pioneering extended techniques,” says Patricia Nicholson Parker, founder of Arts for Art and artistic director of the Vision Festival. “We worked with Andrew to highlight a spectrum of his artistry, assembling a program which touches on all eras of his career, covers a wide variety of styles and showcases his versatility as an improviser, composer and collaborator.”

Cyrille is not the only great to be honored at this year’s Vision Festival: On June 12, the festival will pay tribute to the late drummer Alvin Fielder, a native of Meridian, Mississippi, who became a pivotal figure in the Chicago avant-garde scene, graduating from a late 1950s stint with Sun Ra to become a founding member of the Association for Advancement of Creative Music. His drums can be heard on Roscoe Mitchell’s pioneering album Sound, and from the 1970s onward as a moving force on the New Orleans creative music scene. His longtime bandmates – saxophonist Jordan, the 83-year-old powerhouse who has played with everyone from Ray Charles to R.E.M., and pianist Joel Futterman – will be joined by core Vision Festival artists and indefatigable rhythm section William Parker on bass and Hamid Drake on drums.

Also to be lauded for Lifetime Achievement is artist Alain Kirili. The Paris-born sculptor has long been devoted to the communion of art and music, and jazz in particular. Since an initial collaboration with soprano saxophonist Steve Lacy in 1992, Kirili’s sculptures have been part of a series of unique performance environments, often at his White Street loft – where Cecil Taylor, Archie Shepp, Sunny Murray and many, many others have played. His work can be found in public collections around the world, and in the Museum of Modern Art, Musée d’Orsay, and the Brooklyn Museum, among others. Kirili will join William Parker in conversation on June 13 at the festival.

In addition to veterans and established artists, Vision festival also offers a vibrant platform for a new generation of artists infusing the scene with new ideas and creative swerve. Some of the key artists to watch for: guitarist Ava Mendoza, whose visceral technique and elastic musical concepts make her sound at home in a punk dive or a concert hall; drummer and bandleader Tomas Fujiwara, who brings his 7 Poets Trio; Kris Davis, DownBeat Magazine’s 2017 Rising Star pianist; pianist David Virelles, whose Mbókò project adapts the sacred rhythms of Afro-Cuban religious practice; tenor saxophonist James Brandon Lewis, appearing with his ensemble the Unruly Quintet; saxophonist Darius Jones, bringing his alto to bear on his composition “Cartilage”; and the ensemble Heroes Are Gang Leaders, a sprawling outfit of musicians, singers and poets led by James Brandon Lewis and poet Thomas Sayers Ellis that will make its Vision Festival debut. Listen to a special 2019 Vision Festival playlist via the player below.

Dance had a key role to play on the Vision Festival, and 2019 is no exception. The festival presents crucial figures from New York’s downtown dance scene as well as choreographers whose art is intrinsically connected to musical forms and collaborations with improvisers. Highlights include appearances by postmodern dance heroine Yoshiko Chuma in a duo with Miriam Parker, and a performance by Dianne McIntyre, who is noted for her vital collaborations with musicians such as Olu Dara, Lester Bowie and Don Pullen, among others. Dancer-choreographer Patricia Nicholson Parker will be accompanied in an exciting collaborative performance by two bold spirits: multi-instrumentalist Cooper-Moore and Val Jeanty, a Haitian electronic music artist whose work draws deeply on the spirituality and vodou traditions of her native island. Another can’t-miss is dancer-choreographer Davalois Fearon, who will appear in tandem with clarinetist and saxophonist Mike McGinnis.

As if the festival’s six-day run isn’t enough, Vision 24 also gives audiences an opportunity to warm up for the marathon of concerts. On June 9 at Anthology Film Archives in the East Village a one-day Vision film festival highlights festival artists with four selections, including Milford Graves Full Mantis, Jake Meginsky’s unique cinematic portrait of percussionist, two films by German painter and video artist Stefan Roloff, and artist Jeff Schlanger’s One Long Painting, a presentation of paintings by the musicWitness®, whose “live” paintings of Vision Festival performers have been part of the event since its beginning.

For more information on Vision Festival, including a full artist lineup, visit the Arts for Art website. To purchase tickets, click here.